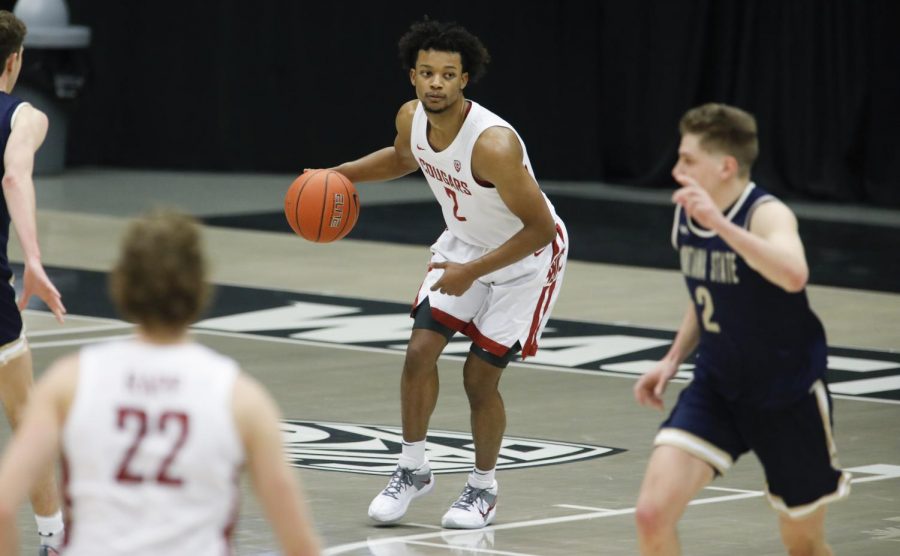 Junior guard Myles Warren handles the ball at the top of the key.

WSU men’s basketball’s trip to the Bay Area ended with a loss when the Cougars (9-2, 2-2) were defeated by the Stanford Cardinals 75-60 on Saturday at Kaiser Arena in Santa Cruz, Calif.

Freshman forward Andrej Jakimovski led the Cougars in scoring for the first time of his career with 19 points and five three-pointers, both career highs for him. Jakimovski said he felt good coming into this game, and he was doing what he does every game, competing.

Senior guard Isaac Bonton followed closely behind with 18 points of his own, 13 of which came in the first half, plus he shot over 50 percent from the field. Head coach Kyle Smith said his performance definitely boosts the morale of the team, but he is still just one player.

“I think he’s getting confident, and better,” Smith said. “We just need to keep guys healthy around him and keep him going.”

Speaking of which, the WSU roster’s health certainly took a hit against Stanford (8-3, 4-1).

With a little over five minutes left in the first half, sophomore guard Noah Williams went up for a layup attempt but was fouled by Stanford and fell hard on his tailbone. Williams instantly reacted in agony and tried to walk off under his own power. He hobbled to the sideline and was checked out by the medical staff; he did not return for the rest of the game.

Smith said the injury doesn’t appear to be too serious and his condition will be closely monitored in the upcoming week.

Stanford junior forward Oscar da Silva came into this game as the conference’s leading scorer. He finished the game with 27 points on 10-18 shooting. Da Silva also managed to record a double-double against WSU, his third straight game with one.

WSU knew about da Silva’s scoring ability and large size coming into this game, but despite multiple different defensive matchups from WSU, the Cougars could not contain his offense.

The duo of freshman forward Ziaire Williams and da Silva combined for 14 points in the first 10 minutes of the game. Stanford did not trail once in the first half while WSU had 11 turnovers, the second straight game for WSU with this first-half stat.

Smith said the turnover numbers were a mixture of missed opportunities on offense and great defense from Stanford.

“We tried to do some things to break their pressure on the side, and they bothered us,” Smith said. “But we had a couple of unforced ones.”

Stanford led WSU 41-30 at the half. The Cardinal’s point total and field goal percentage were both season highs for any Cougar opponent in the first half.

The Cougars came out in the second half with a fire behind them. Noah Williams tried to walk off his injury to help his team. But he quickly returned to the bench and sat out the rest of the game.

Jakimovski said the team had quite the speech at halftime to inspire a comeback because the team now was likely going to have to play without Williams for the rest of the game.

“We knew we would have to step up and compete harder,” Jakimovski said. “We had a chance to win the game.”

WSU cut the Stanford lead down to one four times before finally taking the lead with 7:53 left in the game off a three-pointer from freshman center Efe Abogidi. Stanford, of course, then took the lead again 20 seconds later and kept this lead for the rest of the game.

WSU approached the lead a few more times throughout the rest of the game, but eventually started to fall apart in the final minutes. The team’s 17 turnovers came back to bite them as they suffered their second loss of the season.

Jakimovski said the team needs to keep coming into practice every day and practicing hard in order to get over this loss. The Cougars are set to face the UCLA Bruins at 2 p.m. on Thursday at the Pauley Pavilion in Los Angeles, Calif.