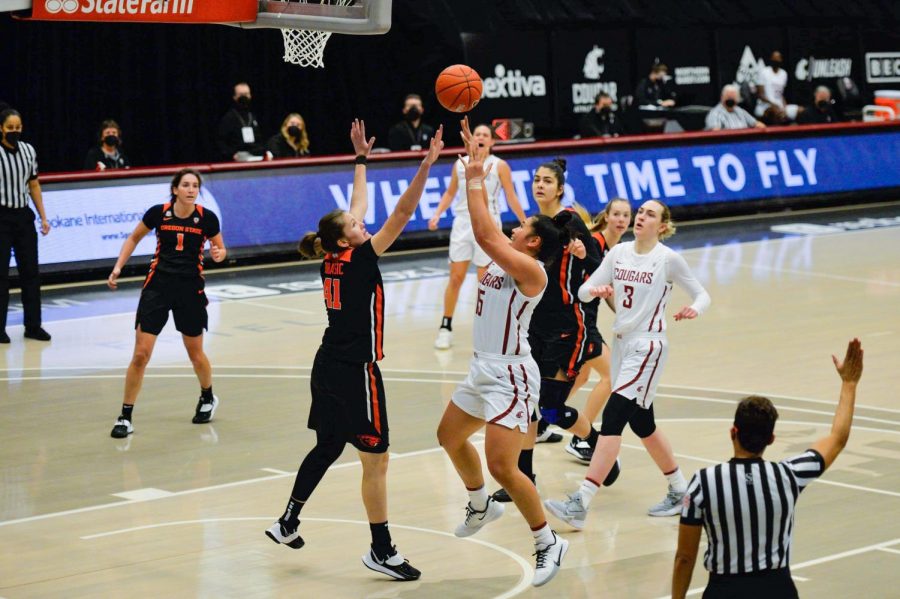 The WSU women’s basketball team defeated the No. 7 Arizona Wildcats 71-69 in an overtime thriller on Jan. 10 in Beasley Coliseum.

The Cougars are undefeated in 2021, starting the new year with back-to-back wins on the road. On Sunday, the Cougars looked to win their first home game of 2021 against the Wildcats.

The Arizona Wildcats (8-1, 6-1) were ranked seventh in the nation for women’s basketball, making them the highest-ranking team that WSU has faced all season.

After the sweep of the Rocky Mountain road trip, Washington State (6-1, 4-1) received votes to appear in the AP top 25 poll for the first time since 2015.

The game started with WSU winning the tip off, followed by empty possessions from both sides. Arizona soon broke the ice with a three.

The Wildcats came out of the gate with a fast, physical defense, swarming to the ball every time a WSU player touched it, barely allowing the Cougars inside the paint.

Sophomore center Bella Murekatete scored the first points for the home team, using her 6-5 frame to put Washington State on the board.

An inside two by sophomore center Emma Nankervis caused the Cougars to hit double digits in the final minute of the first quarter. The first quarter ended with Arizona holding a 22-11 lead over WSU.

The Cougars struck first to start the second, with a three-point play by junior forward Ula Motuga.

A strong defensive stand by the Cougars and a breakaway by sophomore guard Grace Sarver later caused the Cougars to find themselves with momentum on their side, down six.

The Wildcats ended a three-minute scoring drought and mustered their way back to a ten-point advantage, while continuing to keep WSU’s offense in check.

“We struggled in the first half,” head coach Kamie Ethridge said. “Those were some great plays by Arizona.”

The Cougars had trouble slowing down the Wildcats from scoring in the first half. All-American senior guard Aari McDonald terrorized the WSU defense and put up 13 points in the first 20 minutes.

The Cougars found themselves down 16 but managed to make six of their last eight buckets, including a breakaway layup by junior guard Cherilyn Molina to beat the halftime buzzer.

This brought the game to a 40-29 Arizona lead at halftime.

The Wildcats’ defense kept Charlisse Leger-Walker, freshman guard and three-time Pac-12 Freshman of the Week, in check throughout the first two quarters, limiting her to only three points and one assist.

“[Charlisse] is no longer a surprise to the league,” Ethridge said. “Teams are game-planning for her.”

With the team’s leading scorer essentially shut down, WSU had trouble raising the number on the scoreboard.

“It wasn’t going our way, but that played a factor in how we came back,” Charlisse Leger-Walker said.

To start the third quarter, Arizona jumped back out to a 15-point lead and continued to make life difficult for WSU.

Arizona would extend their lead, then the Cougars would scratch and claw to get within single digits, which seemed to be a pattern that the game followed.

WSU built up a 7-0 run to end the third quarter, bringing the score to 53-44 in favor of Arizona.

Washington State scored first to open the quarter, followed by a contested three by Krystal Leger-Walker. Then the Cougars were within two possessions.

An easy two by Nankervis helped WSU, as they finally cracked 50 points.

Charlisse Leger-Walker sailed a pass to her sister Krystal inside for two, followed by a free throw that cut Arizona’s lead to two.

A defensive foul by Nankervis gave Arizona two shots, one of which fell in.

WSU’s defense started to apply more pressure to the Wildcats’ offense, forcing UA to take more contested shots and allowing the Cougars a chance to rebound.

After back-to-back scoring drives by WSU, the game was tied at 57.

Arizona hit an easy inside two to regain a two-point lead at the two-minute mark.

The clock ticked down to one-minute left and WSU had the ball.

Miscommunication by the WSU offense led to a missed shot by Cherilyn Molina that gave Arizona the ball right back.

“We made a lot of mistakes to get us into that position,” Ethridge said.

Following an intentional foul by WSU, Arizona had a chance to put the game away with a free throw. One went in, bringing the score to 57-60 with 28 seconds left. It was then WSU’s ball.

Ethridge was looking for the quick two points instead of a three to tie, but 20 precious seconds ticked off the clock. WSU had to settle for one, as Murekatete made a free-throw.

With seven seconds left, it was Arizona’s ball and WSU was forced to foul once more. This sent Arizona back to the line for two shots.

The Cougs found a bit of luck, as both free throws rimmed out, giving WSU the ball back, down two with five seconds left in regulation.

“I’m not opposed to taking any luck that we can get,” Ethridge said.

There was a timeout on the floor, and WSU had a chance to upset the No.7 team in the nation. It all boiled down to who Ethridge wanted to take the final shot.

After the long-awaited Leger-Walker to Leger-Walker connection in the final seconds, the team’s leading scorer came up when it mattered the most. A left-handed lay-up by Charlisse tied the game at 60. Four quarters weren’t enough, as the game was sent to overtime.

“We simplified it,” Ethridge said. “Once we did that the goal loosened up and we were able to put some points on the board.

WSU scored first in the overtime period, giving the Cougars their first lead of the game.

Following a layup by Charlisse and a three by Sarver, gave the Cougars a two-possession lead.

Arizona cut the WSU lead to three with a pair of free throws, but Krystal Leger-Walker extended it back to five with a minute left.

Both teams were seemingly scoring on every possession in overtime, but a rare, missed shot and rebound by Arizona gave the Wildcats a chance to win.

With fifteen seconds left and Washington State up by two, Arizona had the basketball. It was as if the final minute of the fourth quarter was being played in reverse, with Arizona receiving a chance at the game’s final shot.

A foul by Krystal Leger-Walker, led to two Wildcat free throws, tying the game once more.

There were 10 seconds left and it was WSU’s ball. Everyone in the arena, including the cardboard fans, knew who was getting the ball.

The ball was thrown to Charlisse Leger-Walker, who found space and worked inside the paint. As the final fractions of a second ticked off the clock, Charlisse sunk a contested layup, beating both the buzzer and the Wildcats.

“That was a great play drawn up to get me open, and to give me space on the floor,” Charlisse Leger-Walker said.

The WSU bench erupted, as players swarmed the court.

“Everyone was so hyped, we worked really, really hard to get that win,” Charlisse Leger-Walker said. “We played amazingly as a team, everyone, whether they were on the court or off the court had an impact on the game.”

This marks WSU’s first win against an opponent ranked in the top ten since the 2016 season, and their second win against a ranked opponent in the 2020-21 campaign.

With this win, WSU now sits at second place in the Pac-12, and the team is excited for the NCAA polls to come out next week.

“We’re building on the foundation of what Cougs are, the grittiness and the toughness,” Ethridge said. “It’s a culture.”

WSU’s next game will be on the road against the USC Trojans on Jan. 15 at 4:30 p.m. The game will be aired on the Pac-12 Network Washington.