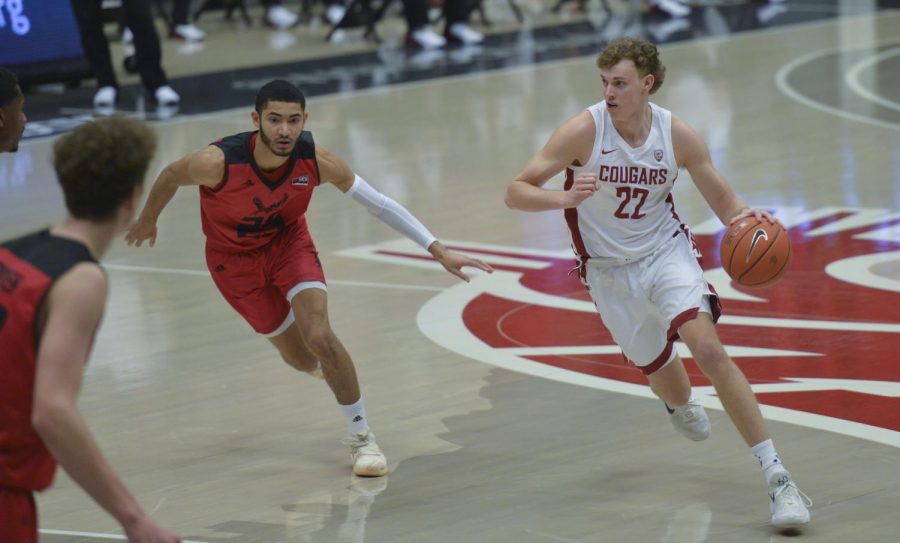 Sophomore guard Ryan Rapp didn't play due to still being in the team's COVID-19 protocol.

A lot of season highs were broken in WSU’s most recent game against UCLA, none of them in WSU’s favor. The WSU men’s basketball team (9-3, 2-3) lost to the UCLA Bruins 91-61 after an overall dominant performance from the Bruins (10-2, 6-0).

This is the first 30-point loss for WSU since facing Oregon in the first round of the 2019 Pac-12 Tournament. Senior guard Isaac Bonton said the team just didn’t come out with the typical “spark” or “energy” they normally have.

“[The Bruins] were more physical than us, they played with more energy than us,” Bonton said. “There were some points where we tried to bounce back, but I just feel like the energy wasn’t there for us today.”

Bonton led the team in scoring once again with 23 points on 10-17 shooting. Bonton had almost no faults in his game, but he said he knows he could’ve done more to help his team come back.

Nearly every uplifting moment WSU had was crushed by UCLA on the following possession. The Cougars went one step forward and then two steps back the entire game.

Sophomore guard Noah Williams was a game-time decision to play against UCLA and ended up starting for WSU. He finished the night with nine points, all of which were threes, and played just over 20 minutes.

Smith said Williams is definitely not 100 percent, but his energy and athleticism were things the team needed on the court.

“Noah’s got a great ability to bounce back,” Smith said. “He’s the athlete that leads us.”

Williams was the second-leading scorer for WSU and the only player besides Bonton who made any considerable impact on offense. Freshman forward Andrej Jakimovski didn’t make any threes, freshman center Efe Abogidi played limited minutes, and the bench scored just 13 points in total.

On top of all the struggles, WSU came into the game as a top-10 rebounding school in the nation with over 40 rebounds per game. The Cougs pulled in just 22 against the Bruins, a new season-low.

The beginning five minutes were rough for WSU, to say the least. The team barely put together five points on offense and gave up 14 points to UCLA. WSU had brief moments of strong offense as the half went on, but UCLA continued to be a force offensively.

UCLA led 54-38 at the half, the most points by a Cougar opponent in the first half this season — as well as the second straight game that record has been broken. Bonton had some bright final minutes of the half, but UCLA mostly dominated WSU through the entirety of the first half.

The second half was nothing but the same trend with a little more dominance from UCLA. Bonton continued his hot shooting performance in the second half but his magic on offense was not enough to help WSU.

Bonton said the team had a talk after the game about how they need to forget this game as soon as possible so they can prepare for their next game.

“You got to let it go out your head, and just figure out what you need to do better,” Bonton said.

WSU is set to face the USC Trojans at 6:30 p.m. Jan. 16 at the Galen Center in Los Angeles, Calif. This will be the last game of a four-game road streak for WSU. It will air on the Pac-12 Network.