Candles are housed in old Cougar Gold tins, selling for $35 each 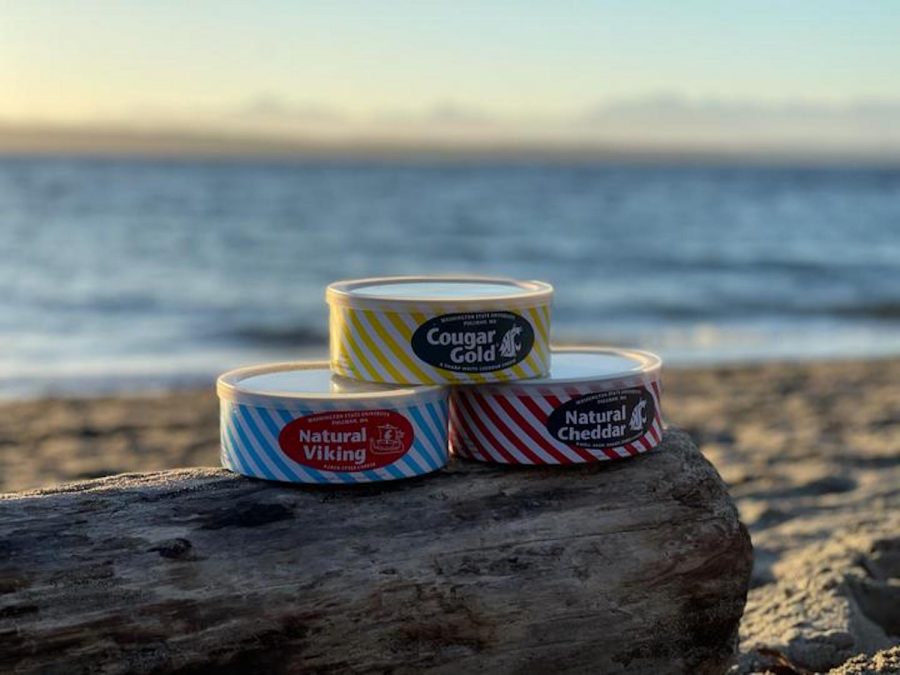 There are nine different scent options for candles, ranging from cucumber water and melon to Christmas hearth.

What started as a quarantine project, repurposing Cougar Gold tins into soy-based candles, transformed into a philanthropic passion for one WSU alumna.

As of January, Christine Smithberg sold more than 700 candles housed in Cougar Gold tins from Ferdinand’s Creamery in Pullman. The sales equated to about $20,000 for the Hilinski’s Hope Foundation.

Smithberg, Seattle-born and raised, graduated from WSU in 2018 with a bachelor’s degree in human development.

Smithberg, along with a group of family and friends, spent a weekend on the Hood Canal about a year ago. The weekend was dedicated to making candles, a long-time hobby of hers. A friend brought a Cougar Gold tin to use for the candles, which sparked Smithberg’s project idea.

After the trip, she posted in the Die Hard Cougs Facebook group asking for any empty Cougar Gold tins. A man from the Seattle area responded and gave Smithberg about 100 cans.

When she posted the candles on the same Facebook group, she sold out overnight. A woman from the group donated 250 more tins, which also sold out within a matter of days, Smithberg said.

“It spiraled from the first trip to Hood Canal,” she said. “They would sell out really, really quickly.”

Due to the pandemic, Smithberg was laid off from her job. However, the project became so big she started her own company called The GoodEye Co.

Smithberg was born with a rare condition, where she cannot move her left eye and can only see 2D because she is missing a nerve in her brain. This inspired her shop’s name, she said.

“It’s just kind of a joke. It’s something that I hold very uniquely to me,” Smithberg said. “I have a tattoo for it, so it’s always a very small part of me.”

Notes, cards and letters from the Hilinski family scattered on Smithberg’s dresser remind her why she started this project in the first place. After struggling with her own mental health, she wanted to help others going through similar situations, she said.

Each candle is $35. There are nine scent options ranging from cucumber water and melon to Christmas hearth. Smithberg also sells 16-ounce glasses with Tyler’s jersey number etched into them. Smithberg donates 33 percent of proceeds to Hilinski’s Hope.

As for the future of the company, Smithberg does not have a monetary goal in mind. However, she wants to continue raising funds for as long as possible, she said.

Since Smithberg’s first $1,000 donation, she started to grow closer to the Hilinski family, mostly with Tyler’s aunt Christine Lombardi.

“It just easily evolved into a friendship where we talk about our families or we talk about experiences we’ve had over our lifetime,” Lombardi said. “I feel that our friendship is very deep and it’s really interesting because we’ve never even met in person.”

Lombardi reached out to football players Gardner Minshew and Drew Bledsoe to autograph candles for an online auction last September, which lasted a week. The candles brought in about $3,000 for the nonprofit, Lombardi said.

The online auction, Hilinski’s Hope and Heart, will continue in May, leading up to Tyler’s birthday on May 26. Auction items will include sports tickets, cruise tickets, candles and wines.

“We’ve come to know Cougar nation,” Lombardi said. “We knew how much Tyler loved it when he was there and how much he felt that it was home to him.”