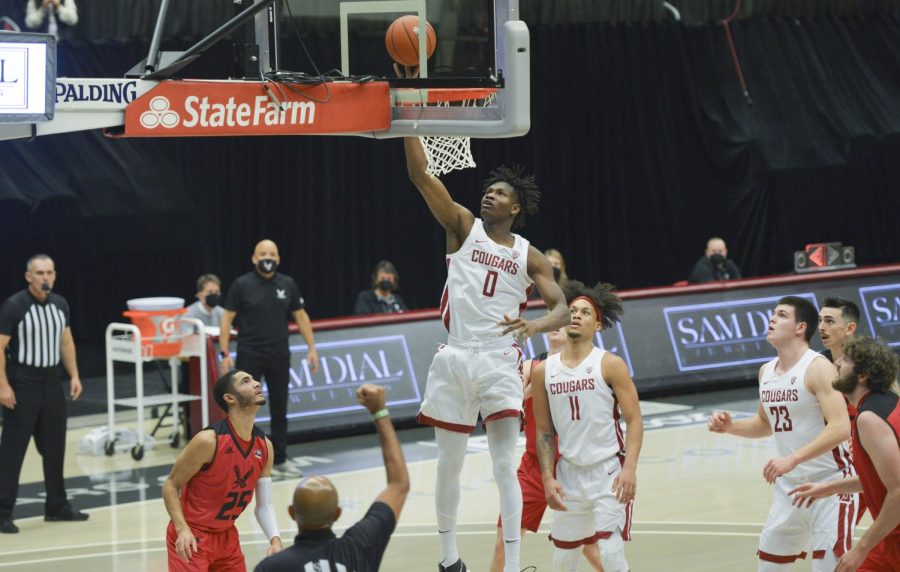 Freshman center Efe Abogidi picks the ball off the top of the hoop against EWU on Nov. 28, 2020.

The losing streak continues for WSU as the men’s basketball team (9-4, 2-4) lost 85-77 to the USC Trojans at the Galen Center on Saturday in Los Angeles, California.

Senior guard Isaac Bonton had another great scoring performance with 27 points, which led the team.

Jackson said he saw some gaps in the Trojans’ (11-2, 5-1) interior defense and he called for his teammates to give him the ball so he could make plays down low.

“I feel like I’m getting better every game, and I just got to keep to the grind and keep working,” Jackson said.

WSU was actually in somewhat of a groove offensively, so much so that the Cougars actually outshot the Trojans from the field, the three-point line and the free-throw line. Alongside WSU, the Trojans rank as one of the best teams in the nation in opponent field goal percentage.

Despite the loss, WSU Head Coach Kyle Smith said this accomplishment is definitely somewhat of a moral victory. However, Smith added the Cougar defense has taken a dip, which is the most important takeaway from the team’s recent struggles.

“I think our offense has been getting better the last six games,” Smith said. “Unfortunately, our defense is taking a slide backwards.”

As opposed to the UCLA game last Thursday, the Cougars did a good job of staying on the tails of USC in the first five minutes of the game. Jackson scored six of WSU’s eight points during this span, already on his way to breaking his career-high in points.

Bonton scored his eighth point with just under 13 minutes to go in the half. It was not until almost 10 minutes later until he scored again. He scored four points in the final four minutes to give him 12 points, which led the team at the half.

“We got to get back to defending better, we gave up some silly points in transition,” Smith said.

The second half started and much of the same story continued on for the Cougars. WSU would occasionally cut USC’s lead down to single digits, but the Trojans would always extend the lead back to double-digits in the following possession or so.

The game looked like it was about to be over until the Trojan defense started to let up some, and WSU was quick to react. WSU certainly had something boiling the moment they cut the lead down to single digits for the ninth time but kept within single digits in the following possessions.

Second-half performances from sophomore guard Noah Williams and freshman center Efe Abogidi gave WSU a spark they needed and relieved some pressure from Bonton and Jackson.

“I think they just got comfortable playing us, they were playing like they were going to win,” Abogidi said. “It was a tough stretch for us, but I feel like we played our guts out today.”

Abogidi said he was not too comfortable in the paint at the start of conference play, but he definitely feels a change in his game now.

Although the lead was cut down to four late in the game, the Trojans realigned themselves and pulled away with the win. This marks the third straight loss of the season for WSU and the Cougars’ ninth straight loss against USC.

Once again, turnovers seemed to be the bulk of the issue for WSU. This is now the fourth straight game that WSU has had at least 15 turnovers, a feat the Cougars reached nine times last season; this season WSU is already at six.

Smith said this team needs to figure out the turnover situation in order to bring his guys back for a home game for the first time in four games.

WSU finally returns to Pullman for their next game, a home contest against the Utah Utes at 7 p.m. Thursday in Beasley Coliseum.