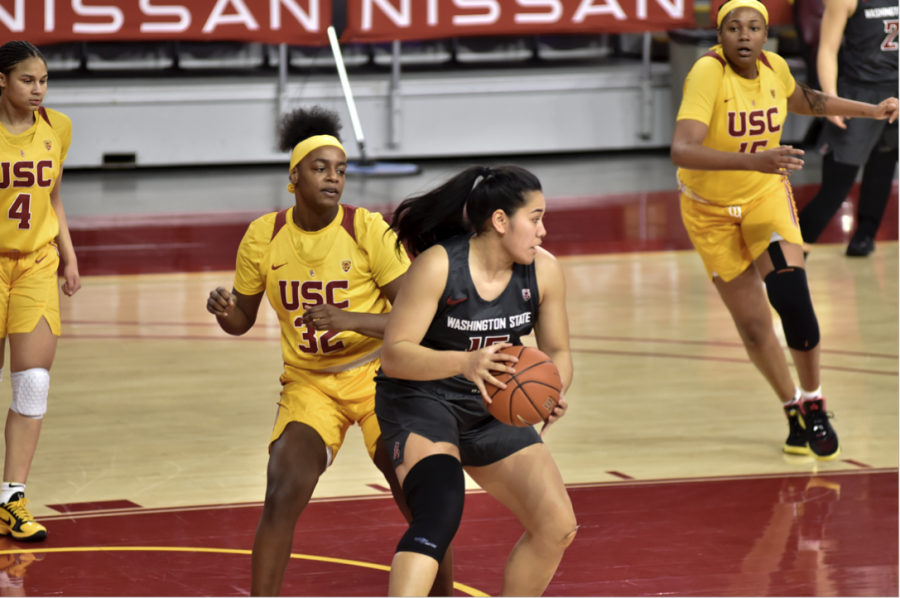 Junior forward Ula Motuga spins toward the hoop against USC on Jan. 15.

The WSU women’s basketball team lost to the University of Southern California 81-77 in overtime on Jan. 15, putting the team at risk of losing their national ranking within days of receiving it.

The Cougars drew first blood, with an under the basket layup by redshirt senior Krystal Leger-Walker.

“Our team showed a lot of grit, heart and toughness in this one,” head coach Kamie Ethridge said.

USC started off 0-4 from the floor, while WSU jumped out to a quick two-possession lead. That was until the only senior on the Trojans roster drained a two.

Johanna Teder sunk the first three-pointer of the game to regain a lead that WSU lost for mere seconds.

Krystal Leger-Walker followed her teammate’s three with one of her own, giving the Cougs double-digit points early in the first quarter.

WSU moved the ball well in the first quarter and got some great looks at the basket but failed to connect on shots.

This gave the Trojans a chance to keep the game close, and the score was 14-12 after the first quarter.

“USC mixed it up a lot on us and it threw us off a little bit,” Ethridge said.

The Trojans struck first to start the second quarter, taking a one-point lead over the Cougars.

USC figured out WSU’s ball movement pattern and forced the Cougars to take more difficult shots. The Cougars were able to regain the lead halfway through the second quarter, then the ping-pong pattern that has been prominent in every WSU game commenced.

WSU would score, then USC would regain the lead. There were nine total lead changes in the first half.

WSU pulled away towards the end of the second quarter, giving the Cougars a 33-29 lead going into the halftime break.

Krystal Leger-Walker started the second half the same way she started the first with a three-pointer, and WSU extended their lead to seven. USC then scored on back-to-back possessions, cutting the Cougar lead to three.

A Trojan foul against sophomore center Bella Murekatete led to a handful of free throws, which freshman guard Charlisse Leger-Walker sunk. She followed that up with a three-pointer, wiping out all the progress that the Trojans just made on the scoreboard.

After the brief run by the Cougs, a scoring drought by WSU that lasted over four minutes gave way to an 8-0 run by USC and tied the game at 41 apiece.

Charlisse Leger-Walker sunk a quick shot to end the four-minute scoring drought, but USC still had the momentum and pulled ahead for the tenth lead change of the game.

The absence of Murekatete, after a foul that resulted in a temporary injury scare, hurt the Cougs. They found themselves down five to end the third.

“She gave us a good post presence against their big [players],” Ethridge said. “We’ve just got to keep stretching minutes together where she’s not in foul trouble.”

The Trojans continued rolling up and down the court, and USC built up a ten-point lead with eight minutes remaining.

Krystal Leger-Walker drained her fourth three of the game, giving her 20 points scored and cutting the USC lead to single digits.

A physical bucket by junior forward Ula Motuga, followed by a Charlisse Leger-Walker layup, and the Cougars were right back in it.

With 40 seconds left, it was USC’s ball. The Trojans milked the clock all the way down to 13 seconds before a shot clock violation forced a turnover.

Just like last game, the Cougars found themselves down by two with a few seconds remaining. Charlisse Leger-Walker got fouled, and that sent her to the line for two, both of which she made.

That tied the game at 64 apiece and sent the game into overtime for the second game in a row.

The Cougars found themselves in a tough position to start the overtime period. Both of the Leger-Walker sisters and Murekatete had four fouls.

USC struck first to start overtime with a soft layup. Washington State responded with a physical layup by Murekatete.

That would be her last bucket of the game, as she fouled out on the ensuing USC possession. The foul gave USC two free throws, both of which were made.

Charlisse Leger-Walker responded with a three to take the lead, which was quickly lost as USC cracked 75 points.

Yet another three by Charlisse put the Cougs down two with 12 seconds remaining.

The Cougars fouled on USC’s next possession, as expected, sending the Trojans to the line for two. Both shots went in, and that was the dagger for WSU.

“I don’t think I quite had the team ready,” Ethridge said. “But this is what you get in the Pac-12; you get people that mix it up on you.”

They battled to the final buzzer, but the Cougars fell to the Trojans 81-77.

This loss really hurts the Cougs, as their top-25 ranking is now in jeopardy. The team will have a chance to rebound on the road as they play the No. 8 UCLA Bruins on Sunday, Jan. 17.