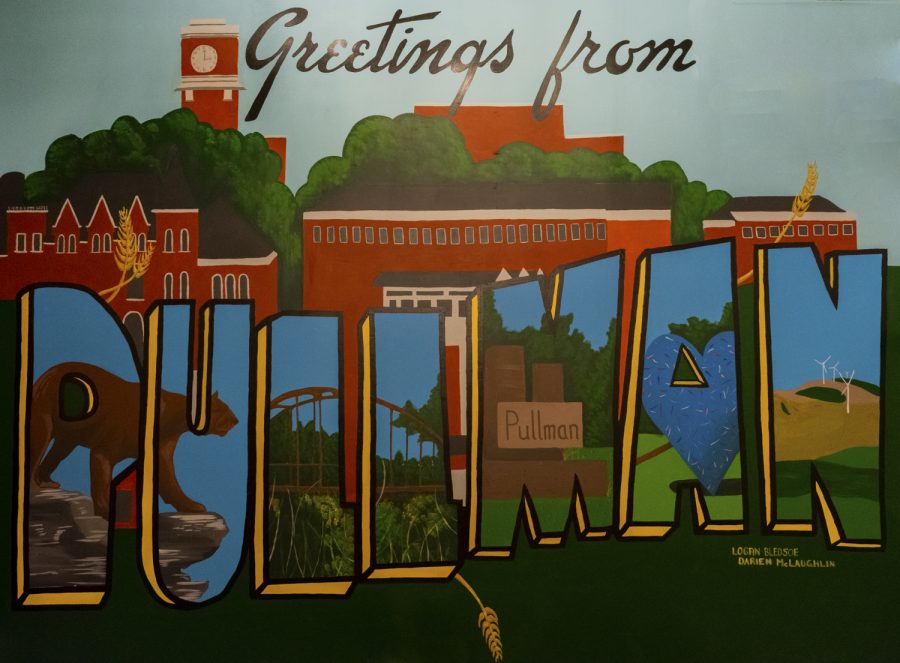 Logan Bledsoe and Darien McLaughlin spent about a month working on the newest mural at Pups and Cups Cafe.

One communications and finance major had no idea that one day she would be commissioned by Pups & Cups Cafe to paint one of her largest projects.

Recent WSU graduate Logan Bledsoe was asked to paint a large mural for Pups & Cups’ new location. The mural stretches across a wall on the back of the cafe on Main Street in downtown Pullman. Cafe owner CJ Robert asked Bledsoe to design a mural that resembled a postcard with different Palouse landmarks painted throughout the picture.

Bledsoe knew she wanted to be an artist, but thought she would only be able to do small projects every now and then because of her major.

She began painting alongside her friend and assistant painter Darien McLaughlin, former Pups & Cups employee, by doing Bob Ross tutorials in their apartment during their free time.

The original idea was Robert’s. Having grown up in Austin, Texas, she loved going to the downtown murals all over the area and her favorite was the Greetings from Austin mural.

“When moving to our new location, we knew we wanted to bring a fun flair to the space and introduce a little bit of Austin to Pullman,” Robert said.

After discussing the project with Robert, Bledsoe got to work designing the Pullman mural for the new shop. Robert specified the owners wanted to mimic the Austin mural and really highlight the fun or unique places in and around Pullman.

“I’ve lived here all my life and would like to include all of the small things and beauties of Pullman onto the mural,” Bledsoe said.

Having so many fun memories, she struggled to pick only a few that were close to her heart. Bledsoe included the bridge in downtown Pullman and other images that she remembered the most.

“I started kind of a small version and then we put it up onto the wall and traced everything out,” Bledsoe said.

Originally the mural was planned to be about five feet by five feet but ended around 15 feet by 15 feet. This is the biggest project Bledsoe has ever taken on.

“You’ll never be able to realize how big it is until you see a person in front of it. I had to show my family a picture of my dog in front of it and they were like ‘Holy crap that thing is massive!’” McLaughlin said.

It took about 120 hours for Bledsoe and McLaughlin to paint the mural from start to finish. They began painting on Dec. 1 and finished on Jan. 4.

Robert painted the words “Greetings From” on the mural to give it the final touch. She wanted it to be the Pullman postcard.

“The Pups & Cups crew love the mural. We love the finished product and really think it captures the uniqueness of the Palouse and Pullman,” she said. “We have a multitude of fun murals throughout our new location and plan to add or change them as time goes on.  You never really know what may inspire someone. The more fun unique art we have the better.”

Bledsoe said she has done a few other projects around Pullman and had her art featured in WSU’s LandEscapes Literary Arts Journal.

“It was kind of a combination of what I’ve been doing the past few years, it was really awesome,” she said. “I love this project. It’s something that the community would really love, and so I’m excited for people to get to see it.”

Bledsoe and Robert hope the next generation of Cougs would come and stop to see the mural, and take a picture in front of it, Bledsoe said.

They hope that getting someone’s picture taken in front of the postcard “Greetings from Pullman” at Pups & Cups, will be a tradition and something students and visitors look forward to during their trip to WSU.