Team will construct prototype, start testing it on fake lung this semester 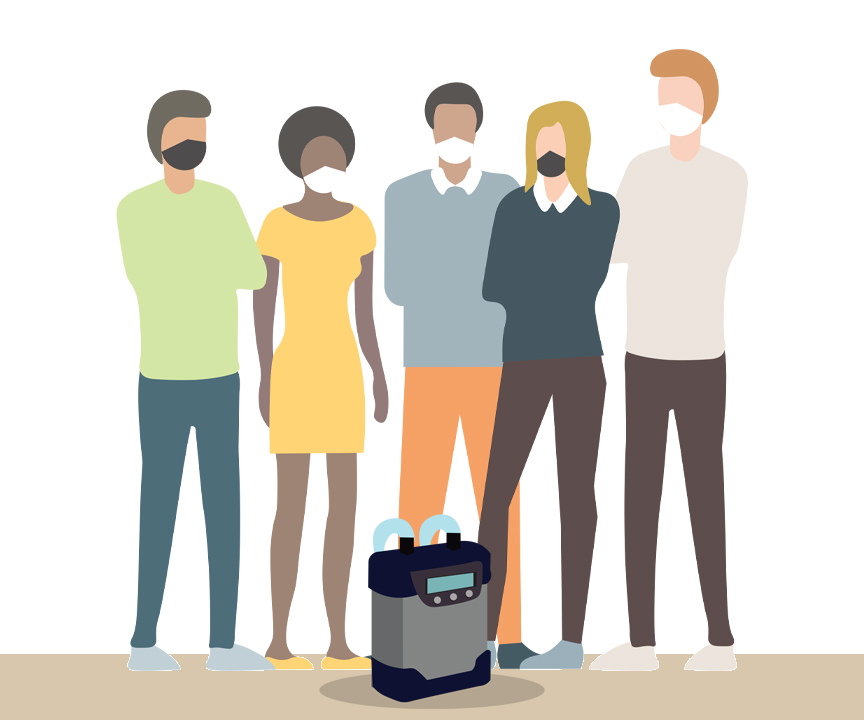 The ventilator the students plan to engineer will be cheaper to produce than a typical venti- lator, which can cost between $10,000 and $50,000 because of design, test and profit costs.

When COVID-19 infections started to spread rapidly across the U.S., the demand for ventilators skyrocketed. A team of WSU electrical engineering students set out to design a low-cost machine that could be used in similar emergency situations.

Four seniors at the Tri-Cities campus knew they wanted to help others for their capstone project. The group comprises Jeremy Dyer, Garrison Wilfert, Aaron Engebretson and Aleksandr Arabadzhi.

After the students chose to engineer a ventilator, next came the challenging part: figuring out how ventilators work.  They understood electrical components from their classes and internships, but they have no medical experience.

“We could have chosen a project that was either financially motivated or just entertainment to create something that passes time for people, but this is something that actually would impact people and possibly save lives,” Arabadzhi said.

The ventilator valves assist patients who cannot breathe in and out on their own. The team is looking into an invasive model, where a tube goes directly into the trachea, Dyer said.

The non-invasive ventilator, a mask or helmet, can crack facial skin due to COVID-19 attacking a patient’s liver. When a person’s liver is not working properly, their skin becomes more sensitive. This is why the team chose an invasive model instead, Dyer said.

“One of the biggest challenges we faced was our lack of clinical knowledge,” Engebretson said. “We’ve never seen a ventilator before.”

The team, instructed by WSU Tri-Cities professors Mohamed Osman and Barbara Philipp, knew they wanted to create a design that would be cheap to produce and easy to use in emergencies, Dyer said.

Although the team does not plan to use the model for COVID-19, they based the project on the disease because its global impact is currently relevant, Dyer said.

Typically, a ventilator costs anywhere from $10,000 to $50,000, he said. The bulk of the cost stems from the thousands of dollars an engineering firm charges for designing a prototype and third-party testing.

Medical companies also factor in profit margins before manufacturing a design, he said.

Project leader Dyer said he handles correspondence for the group. Every group member has different responsibilities, including understanding ventilator regulations and establishing a project timeline.

The team used fall semester to research various ventilator designs by reading page after page of documentation and speaking to experts in the field, Engebretson said.

Wilfert and Engebretson work as interns for Cadwell Industries, a medical manufacturer. Their connections proved to be a resource for the project, Dyer said. Co-workers at Caldwell referred them to Robert Chatburn, a ventilator expert at Cleveland Clinic, a nonprofit medical center.

“He totally changed the direction of our research,” Engebretson said. “We were going toward the wrong type and the wrong design. He gave us a ton of documentation and paperwork.”

Dyer said the group also spoke with his sister-in-law, a head nurse in the COVID-19 unit at an Arizona hospital.

Arabadzhi said he focused on the general user interface of the ventilator. He studied the best ways a nurse can interact with the machine while making sure it meets all safety criteria set forth by the U.S. Food and Drug Administration.

For this semester, the team will begin to construct a prototype to test on a fake lung. Due to distance learning, the group will use their own equipment and tools to begin construction until they have access to the campus lab, Wilfert said.

“I know we won’t go through all the required testing this year,” Wilfert said. “I hope it is passed down to future groups so they can carry this work forward.”