Human rights activist speaks out about her past; hopes current events will lead to unity, organize communities nationwide 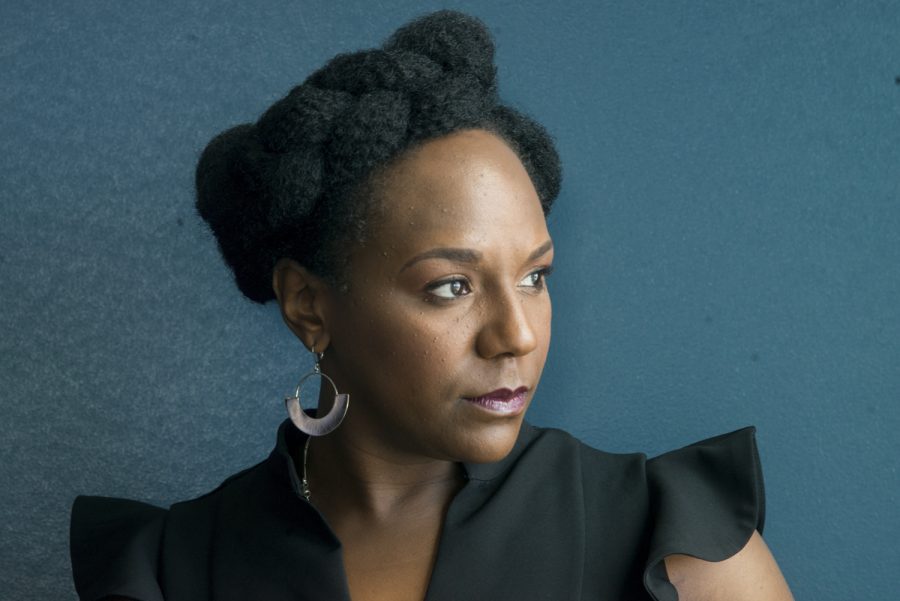 In her fight for racial equality, Bree Newsome Bass has been arrested many times, most notably after taking down the Confederate flag from the South Carolina Capitol.

As an artist and activist, Newsome Bass has a message about how students, in particular, can make a difference as activists.

“I think it is a really powerful time to be a student and I really encourage students to use this time and recognize the power you have.” Newsome Bass said. “We are living through one of the most significant times in U.S. history.”

On June 27, 2015, with the help of a group of 10 organizers, Newsome Bass scaled a 30-foot flagpole at the South Carolina State House building. She removed the Confederate flag in protest after the shooting at Emanuel African Methodist Episcopal Church in Charleston, South Carolina which took the lives of eight people just 10 days prior.

Now, just two weeks after the Confederate flag entered the nation’s Capitol for the first time, Newsome Bass reflects back on her removal of that same flag.

“Clearly one of the patterns in this country has been that we take, what seem to be, steps forward toward equality and justice, and then there is this backlash from people who still want to preserve America as an all-white nation.” Newsome Bass said. “It is shocking, it’s traumatizing, and it’s not surprising at the same time.”

Although Newsome Bass did not always identify herself as an activist, she said she has always been one on some level. A major turning point came for Newsome Bass after a combination of events, including the Occupy Wall Street movement, the attack on the Voting Rights Act in 2013, and the murder of Trayvon Martin, a 17-year-old Black high school student.

“To me, it was shocking because this was in the middle of the Obama administration, and prior to that, the conversation was: have we turned a corner as a nation on issues of race and racism? And to see how quickly something like the voting rights act could be attacked and undone was my major entry point,” Newsome Bass said.

She and so many others joined the cause then as a reaction to the situation. But it was actually the start of something much bigger: a modern movement, Newsome Bass said.

“I think one of the central conflicts of this country is that we never really did resolve the issues of the Civil War,” Newsome Bass said. “I hope that [the attempted insurrection] was a turning point for this country. I think it made clear for people how much work we still have to do.”

Newsome Bass dealt with trauma from the events of the past presidency through her activism. She copes by asking herself what she can do about the situation. Her biggest concern right now is the issue of housing equity, which she has been focusing on since 2016.

Housing is a common issue across many communities, so it is easy to unite around. There is not a single community that is not touched by it and the pandemic has only made the situation more dire, Newsome Bass said.

“We can’t organize the community around anything else if people don’t have a place to live,” Newsome Bass said. “It has really ballooned as a crisis just in the past year.”

Newsome Bass said the issue a lot of people miss with the housing crisis is that it is a public health crisis, and not just an economic one. This has been proven through the pandemic, which has made housing an immediate issue as people are threatened with losing their homes.

“There are so many issues to be addressed but you can’t tackle poverty, education and the pandemic issues without addressing housing,” Newsome Bass said.

With the new administration, Newsome Bass notes the pendulum has swung back in the direction of progress and hope. The election of the first Black and South Asian American woman to the Vice Presidency is significant because it reminds people of the aspirational ideas of America, she said.

Representation is meaningful and holds power, but the question is always how effective representatives will be in bringing needed change to our democracy, she said. This starts with facing the truth about America.

“We have come through an era where there is so much falsehood and … it is important for us to stand in truth no matter what,” Newsome Bass said. “Truth ultimately prevails in the end.”

Newsome Bass will speak more about her experience as an activist during her Zoom talk titled “Tearing Hate from the Sky” at 6:00 p.m. on Jan. 21.