Heart and soul of WSU soccer 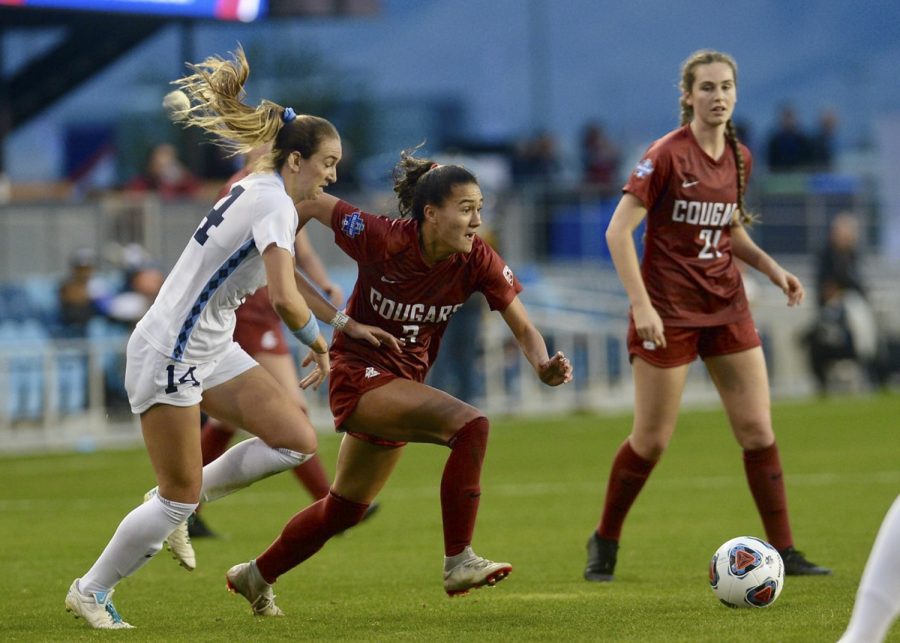 The WSU women’s soccer team has been the program to watch for the last couple of years. One player has helped make history for the WSU women, and that is forward Makamae Gomera-Stevens.

The program took the nation by storm in fall 2019 with an appearance in the NCAA Women’s Soccer Final Four. Needless to say, the last four years for the WSU program have been historic.

Gomera-Stevens was drafted by Houston Dash in the 2021 National Women’s Soccer League earlier this year. Although Gomera-Stevens’ time at WSU might have been cut short because of the COVID-19 pandemic, her lasting legacy will not be forgotten.

“It’s really fun to have her as a teammate, she’s a really good captain for the team,” McMillion said. “She’s a great role model for the younger players. She brings a lot of energy to the team.”

Gomera-Stevens grown both on the field and off the field. According to head coach Todd Shulenberger, Gomera-Stevens is one of the hardest workers on the team and is truly a critical player for the Cougs.

“You always watch a kid grow on the field, but she’s grown off the field,” Shulenberger said. “She’s one the best players that has played at [WSU], and I’m proud of her in the decisions that she had made off the field.”

The 2019 season was an amazing season to watch for WSU soccer fans. Although the Cougs fell to the Huskies in the Apple Cup, the team bounced back and fought their way into the Final Four, something that stunned the collegiate soccer nation.

“It was a stinger to lose to UW, but after we lost our assistant coach, Jon [Harvey] said, ‘It’s ok, we’re going to the Final Four,’ and that loss was the motivation that we needed to work harder,” Gomera-Stevens said.

As a captain of the soccer team, Gomera-Stevens has been able to motivate the team and create a bond that is like no other. Her work ethic and personality have motivated and driven players and coaches to perform to the best of their ability.

“Being able to uplift people if they’re feeling down, she’s always trying to help the younger players on their game and tell them what they need to work on,” McMillion said. “Her personality is contagious to the team and she’s an amazing friend to have, everyone on the team loves her.”

To Gomera-Stevens, soccer isn’t just a ball on a field, but it is a way to give back to all those that have supported her on her journey to now being a professional soccer player.