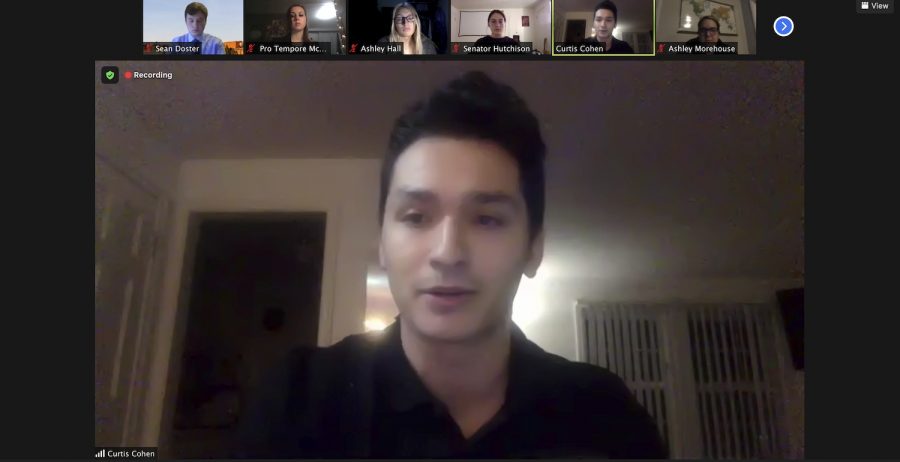 ASWSU President Curtis Cohen said he is working with leaders in the Student Government Council to try to reduce the $60 graduation fee.

ASWSU President Curtis Cohen discussed plans to develop a portal for students to file sexual assault reports as part of his focus on students’ mental health for the spring during a meeting Wednesday.

Cohen said he will allocate more resources to student mental health as students navigate through the COVID-19 pandemic.

“We do acknowledge that we don’t have a spring break and so that’s going to definitely put a lot of mental strain on students,” he said.

Creating a portal to make sexual assault statistics and resources more accessible to students is a priority of Cohen’s. Students need a more effective way to file sexual assault reports, he said.

“If you try to look for sexual assault resources on our WSU system, it’s really hard to find anything,” he said. “The information is there, but it’s fragmented through all these different sorts of websites.”

Cohen said it would be similar to the University of Washington’s portal, which focuses on reporting sexual assault and educating students about what the reporting process looks like.

Cohen said he is also working with leaders in the Student Government Council to try to reduce the $60 graduation fee.

“We don’t think it’s completely fair to charge us a full 100 percent of the fee if we are not going to be getting services like Beasley Coliseum or any of the other in-person events,” he said.

Ciara McCall, coxswain and treasurer for Cougar Crew, was unanimously confirmed as the Election Board chair.

The upcoming ASWSU election will be entirely online. Transitioning into a virtual format will require restructuring how the election is conducted, said ASWSU vice president Sean Doster.

McCall said a priority of hers is making sure every student who wants to vote is able to.

“The precedent is definitely that people are wanting to vote and they’re wanting to make a change,” she said. “It’s just up to [the Election Board] to make sure they have the opportunity to do so.”

Last year, voter turnout for the ASWSU election was 12 percent. McCall said she is hoping to increase that percentage.

To increase participation, she is relying on social media, incentives and word-of-mouth advertising. Another proposed method is to ask professors who teach 100-level courses to take five minutes out of class time for students to vote, she said.

Luu said he hopes to donate a portion of ISC’s budget to Pullman Regional Hospital. Last year, the council donated about $2,000 to buy masks.