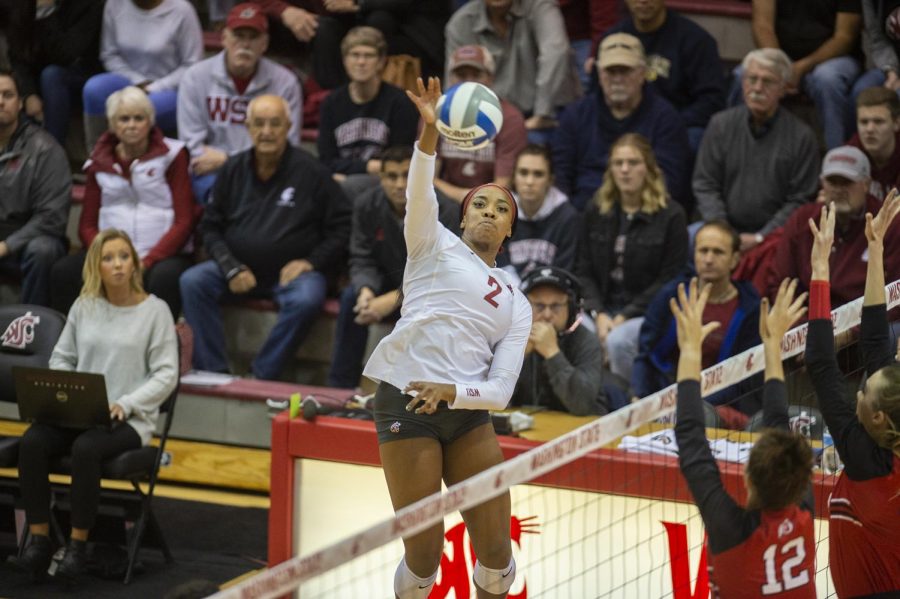 Redshirt sophomore outside hitter Kalyah Williams jumps up for a spike on top of defenders.

WSU volleyball opened up a delayed 2021 season with a split series against the Oregon Ducks.

On Friday, the Cougars and the Ducks both started their seasons at Bohler Gym. The Cougars were led by sophomore outside hitter Pia Timmer and redshirt sophomore setter Hannah Pukis.

Both players were crucial to the team’s victory. After the match, Timmer, who is from Emlichheim, Germany, called her move to Pullman, “one of the best decisions of [her] life.”

In a pre-game press conference, head coach Jen Greeny expressed worries about the team’s readiness for the season.

“On a scale of one to 10, [our preparation is] probably a two, to be honest … We have had a very, very limited number of practices with the entire team,” Greeny said. “The optimism would probably be a little higher if we would have just had some more time to gel and practice before we start.”

That optimism definitely appeared to return during the match. WSU came out of the gate hot, winning the first set, 25-20.

In the second set, Oregon seemed to settle in, picking up a 25-19 win, the largest win in any set on Friday.

The real action opened up in the final two sets. WSU took both by a score of 25-22, but the competition was heating up in both.

The fourth set saw the teams separated by at most one point for the majority of the set.

Match one saw one glaring flaw that would come back to bite WSU in the second match: errors. Both teams recorded over 20 errors each. That is not unexpected as both teams were coming off of short training camps and are the youngest two teams in the Pac-12, but it was definitely something both will have to clear up to be more competitive later on.

On Sunday, the teams faced off for their second meeting. This time, the Ducks were able to come out on top in a thrilling affair.

Just like in the opener, errors were an issue for both teams. Both the Ducks and the Cougars recorded lower hit percentages and a higher number of errors, with WSU racking up 39 errors and a .093 hit percentage.

Once again, Pukis did her job as a setter with 42 assists, but also recorded four times as many errors as she did on Friday.

Although the game was sloppy, it certainly did not lack excitement. Neither team was able to win multiple sets in a row. Four of five sets were decided by six points or fewer, with the fourth set being the tightest, as WSU won 25-22.

Despite the loss, Pukis and Timmer played well again. Both players recorded their second double-doubles in as many games.

The Cougars will return to action on Thursday with a weekend series against Arizona State. The match is set to begin at 11 a.m. on an Arizona State live-stream.