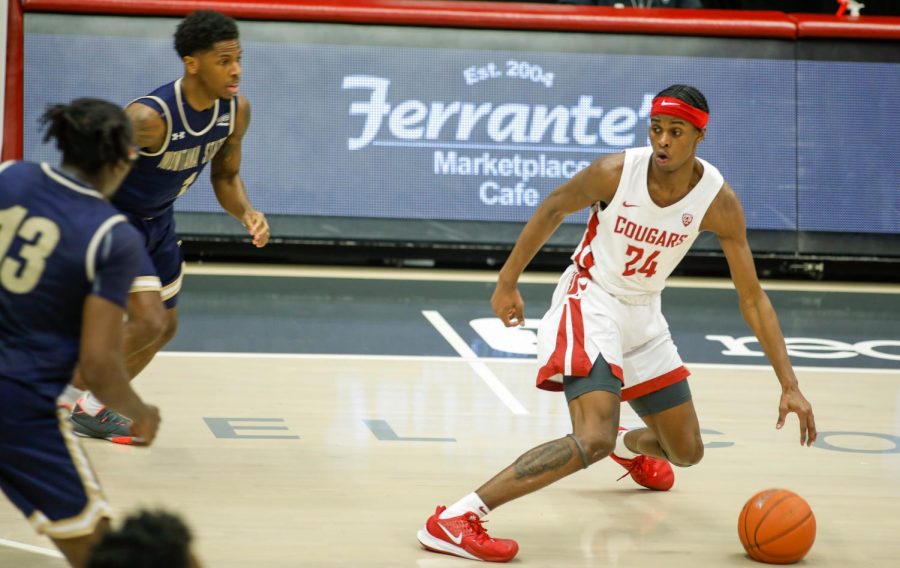 Sophomore guard Noah Williams makes a move on a defender.

After a brutal home defeat against the Buffaloes last Saturday, the Cougars (9-6, 2-6) are set to go on the road to Boulder, Colorado, to face Colorado (12-4, 6-3) for back-to-back games.

In the previous game between WSU and Colorado, the Cougs held an 18-point lead after a fantastic start on offense early in the first half. However, the Buffaloes turned things around and ended up winning the game by double-digits.

This loss was the first time this season that WSU has lost with a lead at halftime. WSU head coach Kyle Smith said the loss didn’t have a different feeling to it regardless of blowing the lead. He said all the losses this season have hurt.

The Cougars are now on a five-game losing streak for the first time since two seasons ago in March 2019. Following the Colorado loss, sophomore guard Ryan Rapp said the environment of the locker room is more motivating than it is dreary.

“We’ve all talked about [the loss], we know what’s going on.” Rapp said, “We just all need to come together right now as a team, sort our stuff out and just get ready for practice this week.”

WSU was not supposed to play Colorado in back-to-back games when the initial schedule came out before the season started. In fact, this game on Wednesday is the rescheduled game that was canceled in November between the two schools.

Smith said before he’s not sure whether the back-to-back games are an advantage or disadvantage for either side. In the West Coast Conference, where Smith previously coached before coming to WSU, their schedule occasionally ran snake style. This means schools play each other in one venue for the first game, and then play in the opponent’s venue in the next game.

In this case, back-to-back games may hurt WSU on Wednesday. In the past two games, the Cougars’ opponents’ leading scorer has been a big man. Against Utah it was Branden Carlson, against Colorado it was Evan Battey, and both performances rank as some of their top-scoring performances this season.

Smith said the defense down low against Colorado on Saturday was good. But experience, age, and strength will help on low post offense, something that Battey certainly has as a junior forward who weighs around 262 pounds at the four.

Aside from Battey, Colorado’s star senior point guard McKinley Wright IV will likely remain a problem for the WSU defense on Wednesday. Wright IV averages 14.3 points, 5.3 assists, and 7.3 rebounds in the last three matchups against WSU.

Rapp gave Wright IV all the credit for his second-half performance in the comeback effort from Colorado, but WSU can’t let that happen again if they want to win on Wednesday.

“He’s a great player, we expected that,” Rapp said. “We just have to make sure we can’t allow him to motivate his guys like that and rally back into the game.”

Another player to watch from Colorado is junior guard Eli Parquet. Parquet has been on a tear on defense these past five games; he averages 1.4 steals and 2.2 blocks per game during this span.

Smith acknowledged Parquet’s presence in the loss to Colorado. Even though Parquet went scoreless against the Cougars, he still affected the game tremendously, Smith added.

Colorado is 5-1 in their last six games. Ignoring the upset loss against UW last week, Colorado is rolling through the conference as of late. They don’t turn the ball over a lot, and they take advantage of their foul shots, two aspects of basketball that WSU has struggled with this season.

Tip-off between WSU and Colorado will be at 6 p.m. Wednesday at the CU Events Center in Boulder, Colorado. Fans will not be permitted to attend, but the game will air on ESPNU.