No. 23 UCLA, USC sit at top of power rankings in week 10 as Cougars fall in ranks due to 5-game losing streak; Washington, Cal at bottom 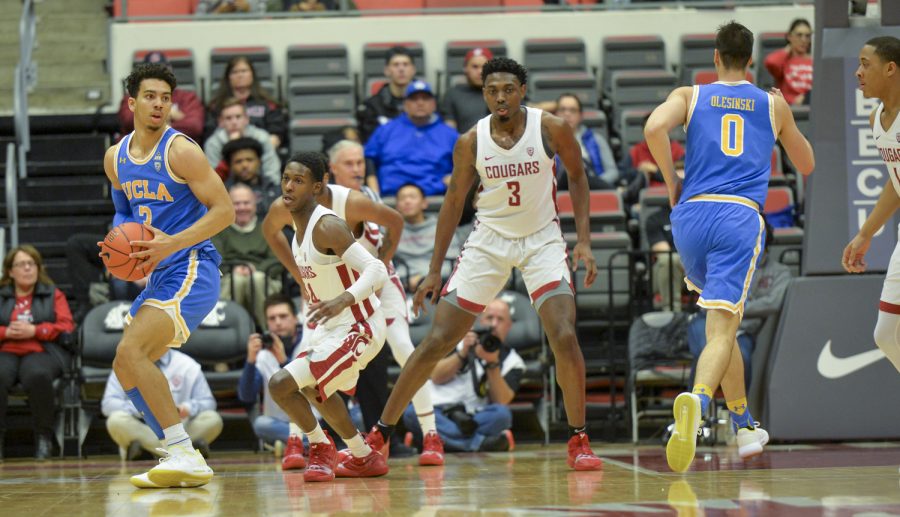 After 10 weeks of Pac-12 men’s basketball, the conference seems to be all over the place, and the contenders at the beginning of the season seem to be “pretenders.”

No. 23 UCLA is still the best team in the conference, and the fight at the bottom is close between three different programs.

Here are my power rankings for the Pac-12 men’s basketball season to date.

The Bruins seem to be the most unstoppable team in the conference, even though they suffered their first loss to Stanford this past weekend by a buzzer-beater in overtime. Redshirt sophomore guard Tyger Campbell had a bad shooting day, going four of 12 from the field in his overtime performance. UCLA struggled this past weekend but looks to continue to lead the conference.

Once again, UCLA’s cross-town rival, USC, had an impressive week beating California on the road. The Trojans did not play Stanford due to inconclusive COVID-19 results within the USC program. USC lost a close game against Oregon State in a bad shooting game, only shooting about 56 percent from the free-throw line. They bounced back against the Cal Golden Bears, with freshman forward Evan Mobley shooting 12 of 15 from the free-throw line. The Trojans look to keep moving up as their season continues.

The Buffaloes had an even week, suffering a bad loss to the Huskies in Seattle, but then coming back to defeat WSU on the road. The “fluke” game against WSU saw the Buffaloes shoot one of 18 from behind three-point range, a horrible shooting day for Colorado all around. Against the Cougars, the Buffaloes went from down 18 early on to leading by 18 in the second half, led by junior forward Evan Battey, shooting six of 11 from the field and having 16 points.

The Wildcats beat their in-state rival, Arizona State, on a buzzer-beater layup by freshman forward Azuolas Tubelis in their one game this past week. Even with a very limited bench of three people, Arizona still showed up against the Sun Devils, with junior guard James Akinjo scoring 24 points on eight of 17 shooting from the field. Even though the Wildcats don’t have any postseason aspirations, Arizona still seems to have a conference regular-season title on their minds.

The Ducks had their first game after a long pause due to COVID-19 issues. They lost by 11 at home against their in-state rival, Oregon State. The rust from a long break without a game showed, as the Ducks could not hit anything from the field. Redshirt senior forward Eugene Omoruyi and redshirt junior forward Eric Williams Jr. combined for eight of 26 from the field, combining for 26 total points. Oregon’s first game back from COVID-19 issues did not fall the way they wanted. But with more practice, they will get back near the top.

The Cardinal beat the only undefeated team in the conference, UCLA, by a buzzer-beater layup from senior forward Oscar da Silva off an in-bounds play. In their one game this week, Stanford made a national name for themselves, knocking off the Bruins at home in a back-and-forth game. A 26-point game from Silva, along with junior forward Jaiden Delaire, who scored 19 points, led the Cardinal past UCLA. Stanford could be a dark horse in this conference with good shooting days like this.

The Beavers are riding a three-game winning streak, beating Arizona State, USC and Oregon in that span. Oregon State beat USC in a last-second effort, but the biggest contributor was senior center Roman Silva off the bench, scoring 12 points on six of seven shooting in 15 minutes. The Beavers shot about 92 percent from the free-throw line against Oregon on Saturday, with a lot of help from senior guard Ethan Thompson, who shot 12 of 14 from the line. The Beavers are slowly climbing up the ranks during this winning streak.

The Utes split their road trip to Washington, beating the Cougars on the road, but losing close to UW in Seattle. Against WSU, 24 bench points combined from senior guard Alfonso Plummer and junior forward Riley Battin helped Utah get past the Cougars easily, along with sophomore center Branden Carlson getting 14 points on seven of 12 shooting. Utah came up a little short against the Huskies. Even though the Utes shot about 51 percent from the field, they were outshot by Washington. An even week for Utah puts them in a positive outlook moving forward.

The Cougars have been slipping, currently on a five-game losing streak, and the age of this team is being exposed. WSU got swept by Utah and Colorado, losing by double-digits in both contests, and the shooting just was not there. The Cougars shot about 38 percent against Utah on Wednesday and about 42 percent against Colorado on Saturday. Led by senior guard Issac Bonton and sophomore guard Noah Williams, this team is in a losing rut and needs to get out of it, or else they could fall to the bottom.

The Sun Devils got hit with the same post-COVID-19 drought as Oregon, in terms of bad shooting days and losses. Arizona State faced their in-state rival, Arizona, in a thrilling game that went down to the last second. They relied on senior guard Remy Martin to help the Sun Devils get a win, but he shot four of 11 and tallied 18 points, but it was not enough. This is the second consecutive game where Arizona State lost on the last possession of the game. A tough break for a well-known program.

You may be wondering why the Huskies, who only have three wins on the season, are ahead of California, who have seven wins on the season. The answer: momentum. The Huskies swept Colorado and Utah for their first wins in the Pac-12 all season, as well as their first win since Dec. 9 of last year. An impressive game off the bench for sophomore guard Marcus Tsohonis with 27 points scored in 27 minutes against Colorado. Against Utah, junior guard Jamal Bey scored 28 points on 10 of 11 shooting. The Huskies may have found their shooters other than senior guard Quade Green.

The Golden Bears got swept by the Los Angeles schools at home, and the momentum seems to be going in the wrong direction after beating Utah the previous week. Without junior guard Matt Bradley, this team still cannot find a solid shooter to replace him for now. Senior forward Grant Anticevich is doing a good job filling Bradley’s absence, scoring 21 points against UCLA on eight of 11 shooting, and 15 points against USC on five of 10 shooting. The Golden Bears just need Bradley back to maybe get some more wins in the conference.