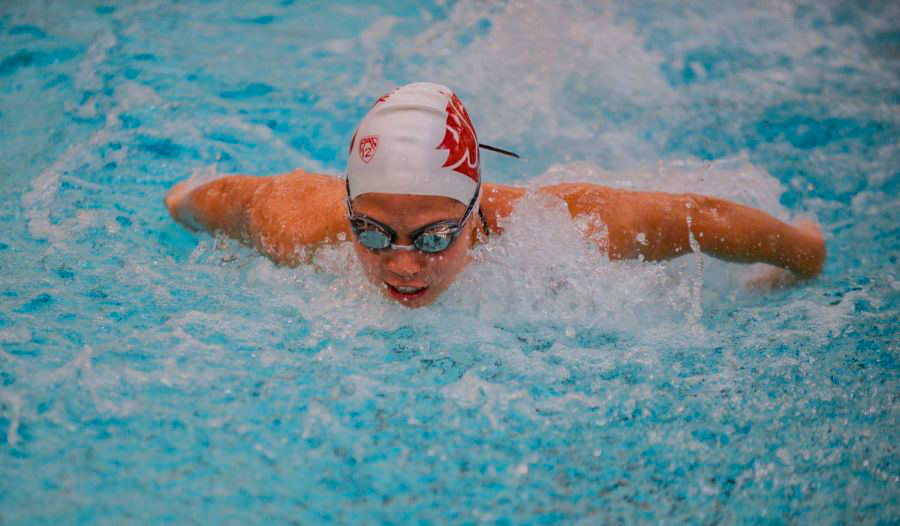 The WSU swim team will compete against the University of Idaho Vandals at 5 p.m. Friday at the Gibb Pool in Pullman.

Seniors Chloe Larson, Taylor McCoy, Mackenzie Duarte and Sam Howell will swim in their last meet in the Gibb Pool in a WSU cap.

“This group of seniors have always been so welcoming to us. They are such good positive team leaders and they have helped build this positive team culture to where we are now all like family,” junior sprint freestyler Paige Gardner said.

WSU is coming off of a hot contest against Seattle University, as the Cougs won the meet 161-100 with several seniors and freshmen having personal wins in their events.

This week the Cougars are swimming in their last regular season meet, as the Pac-12 championship is scheduled to start on Feb. 24.

Even though it is the last regular season meet of the season and senior night, the Cougars still feel they need to keep preparing for the Pac- 12 championships and a potential appearance at the NCAA swim meet later this year.

“We want to get the win for our seniors, and we really put an emphasis to cheer for each other during our swims,” Gardner said. “We want to push each other to swim the best we can.”

This last meet isn’t what any of these seniors expected, as their season was put on hold in late November due to the pandemic. This group of seniors has been through many transitions and climbed many roadblocks during their time as Cougs.

“When there’s a transition in a staff, and you’re trying to find common ground between the culture that you are trying to build is so important,” head coach Matt Leach said. “This last semester we had the highest team GPA ever and went to the NCAAs for the first time in nine years and that’s because of these four seniors.”

Larson, one of the three team captains, has made a huge impact on the WSU swim team. Not only has she set the Gibb Pool record for the 50 free that was previously held by a Canadian Olympian, but she has also led the team both vocally and quietly, Leach said.

“She is another captain elected by her peers and she’s been training at a high level all season. I’m excited to see where she is going to go conference and beyond,” Leach said.

McCoy is another team captain who also made a huge splash for the Cougs in the pool, including being Pac-12 swimmer of the week when facing Arizona in 2019, winning three individual events.

“[McCoy] is a Coug through and through; she lives and breathes Washington State,” Leach said. “She represents what it means to be a Cougar.”

The last captain, Duarte, played a huge part in getting WSU back to the NCAA swim meet in 2019.

“She dropped a ton of time in the 200-breast to get to be an A finalist in Pacs. She is an Olympic trial qualifier in the 200-meter breaststroke. She has a school record as well,” Leach said.

Distance swimmer Howell has also made an impact both in the long-distance realm, but also in the classroom.

“Sam has shown a ton of growth academically. I’m proud of her because of the changes that she made in the classroom to help our family,” Leach said. “This year might not be what she wanted, but I’m proud that she pushed through.”

The graduating class of 2021 has had a major impact Leach’s career and the team as a whole. These four seniors have paved the way for this team to continue to improve and build upon this season and continue to be better for next year.

“I’m so proud of this senior class for coming back, especially where everything is right now,” Leach said.

Catch the Cougars in action against the Vandals, 5 p.m. Friday in Gibb Pool. The meet can be streamed live on the WSU athletics website.