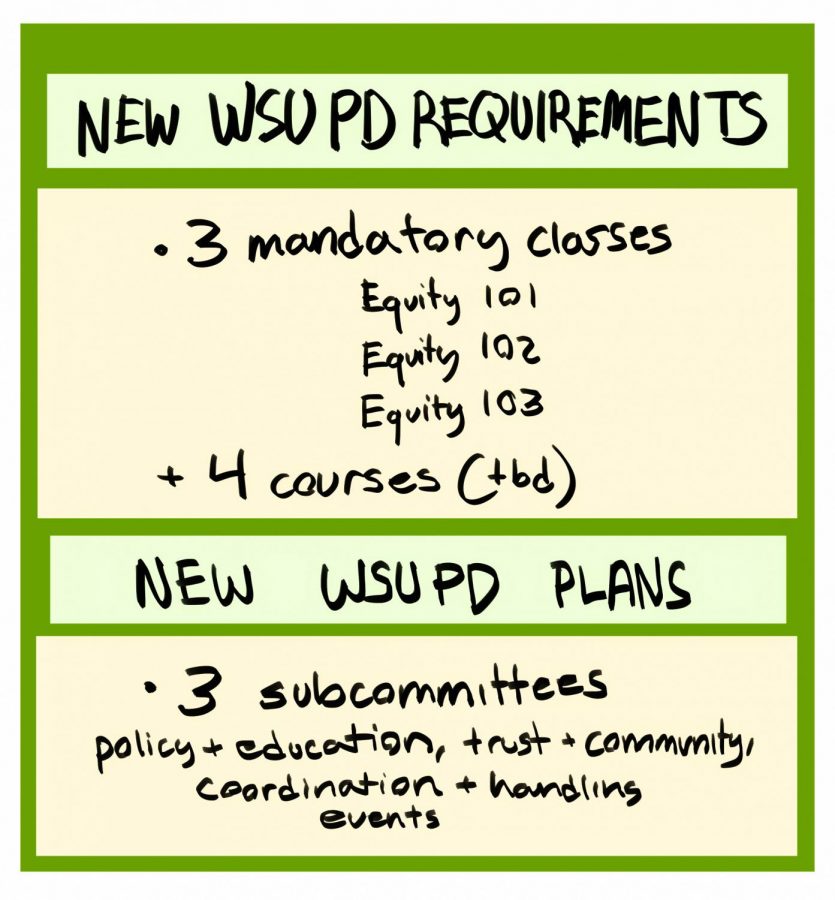 In order to become certified by WSU’s Office of Outreach and Education, police department employees will need to complete seven workshops covering four areas: building a foundation, allyship, skills and building community together, according to WSU’s Division of Student Affairs website.

The department employs 22 commissioned police officers and six civilians, said WSU Police Chief Bill Gardner. They are completing the first three workshops — Equity 101, Equity 102 and Equity 103 — in two groups within a week or two of each other.

Gardner said he completed the first workshop in December before the strategic plan was released. He will complete the second workshop in February and the third in either March or April.

Employees must complete four other workshops of their choosing to become certified, according to the student affairs’ website. These workshops include UndocuAlly Training as well as Cultural Interaction and Communication.

“What we want is enough training, so that when people are discussing these issues, their minds and hearts change as they hear peers talk about it, hear other people talk about it,” Gardner said. “And maybe in their quieter moments, they start to reflect.”

However, CCR did not find a pattern of discriminatory behavior conducted by WSU PD, according to the report.

Gardner said there is nothing in him saying the statistics in the data set are wrong, but it also does not mean WSU PD’s officers are targeting people of color.

The strategic plan will help the department receive more training, better collect and review data from officer-citizen interactions, foster better relationships within the community, as well as review and recommend changes to current policies, according to the plan.

One of the department’s current issues highlighted in the plan is its inability to properly collect and process race data during officer-citizen interactions, Gardner said.

Washington does not include race on driver’s licenses, so race data is only collected by an officer’s observations or by asking for that information.

“Imagine a police officer stopped you saying, ‘Hey your taillight’s out, by the way, got to know your race,’” Gardner said.

The WSU Police Advisory Board is working on ways to gather race data without escalating contact during officer-citizen interactions or researching an individual’s private data after the interaction, he said.

“Imagine if I stopped and talked to you, and then I went back to the police department, and then I started rooting through all of your school records to find out what your race was, so that I could put it in a report or check a box,” he said. “That really smacks of really invasive policing.”

Some of the board’s ideas include using a questionnaire during an officer-citizen interaction, using a citizen survey after an interaction, or using data from school records. But Gardner said he does not want a decision to be made without community support.

The strategic plan also establishes three subcommittees made up of police advisory board members to address policy development, said Trymaine Gaither, board member and recruitment and career coordinator for WSU’s Honors College. The committees began meeting in November.

Gaither said he heads the second subcommittee, Trust and Community, which works to build trust between the department and citizens through community outreach. There are seven people in this subcommittee, including several professors and a student representative.

“One of our objectives is to really go out and listen to the concerns of students, faculty, staff and community members and effectively represent their needs to WSU,” he said. “That’s what we hope to accomplish … just serve as that bridge between the community and WSU.”

The plan lists registered student organizations and community organizations that the department should establish relationships with, including ASWSU, Black Student Union and Black Leaders of Transcendence and Influence.

Gardner said the list was recommended to WSUPD by the WSU Student Legal Research Association, but not all organizations on the list were notified of it.

“We’d like to have a closer relationship with some of these groups, and so that’s why that’s in there, but it sounds like they didn’t know they were in there,” he said. “That’s a problem.”

“They want to see ongoing effort and ongoing commitment to improving the relationship with student-athletes and the police department,” Gaither said. “They want to see them continually try, and not just [do] one presentation or one PowerPoint meeting on their own.”

The third subcommittee, Flashpoint, is headed by Matthew Jeffries, police advisory board member and director of Gender Identity/Expression and Sexual Orientation Resource Center.

Flashpoint reviews the department’s general procedure to handle specific events that occur in town, like demonstrations or protests on campus, as well as basketball and football games. Part of their reviews include looking at the department’s de-escalation policy, Jeffries said.

Subcommittee members are currently in the “education process,” Jeffries said. They are learning about which policies exist and which ones need thoughtful feedback before giving that feedback.

“Change has to come, of course, and if we don’t engage in the difficult dialogues around things, or better understand what’s happening, how do we change?” Jeffries said.