No. 10 WSU breaks six-game losing streak against Washington; goes down one spot 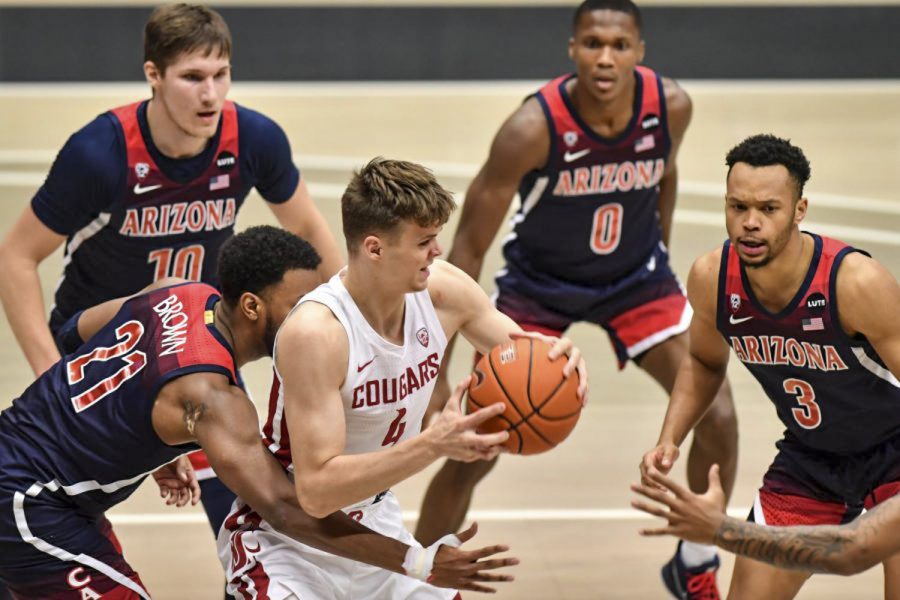 Junior forward Aljaz Kunc drives through Arizona defenders towards the basket on Jan. 2, 2021.

Another week of Pac-12 men’s basketball saw No. 21 UCLA, along with USC and Colorado, stay at the top of the conference.

The middle of the pack is very fuzzy, with Stanford, Oregon State and more, all trying to climb up right in time for the Pac-12 tournament.

Here are the Pac-12 power rankings after the most recent week of basketball.

The Bruins just got past Oregon State at home this past week in a close game that went down to the last 10 seconds. Their game against Oregon was postponed because of the Ducks having COVID-19 issues. UCLA scraped out a win after shooting only about 33 percent from the field. The Bruins proved not to be messed with, especially being the only team in the Pac-12 ranked.

The Trojans also got past Oregon State this week, winning 75-62 in a rematch of the previous week. Just like UCLA, USC had their game against Oregon postponed. Led by freshman forward Evan Mobley, the Trojans shot about 45 percent from the field, and Mobley contributed a double-double en route to a win. This team is clicking and could dethrone their inter-city rival, as the teams are set to play on Saturday.

The Arizona team has something special about how their young core is really meshing well with their ability to win close games. This team beat Arizona State earlier in the week, had a close loss to Stanford on the road, and then bounced back against California. Sitting at 7-4, the Wildcats have a bright future, even with the postseason ban. Watch out for this team this year.

Colorado slipped against their “rival” Utah this past week, after having a 19-point lead, only to lose by three at home. Colorado almost lost to WSU and lost to Washington and Utah in three of their last four games. This is not the trend the Buffaloes want to be on right now. Senior guard McKinley Wright IV shot five of 14 from the field and did not look like himself. The Buffaloes still are good, they just need to get out of whatever is going on.

The Ducks did not play this week because of COVID-19 issues within their program. Their games against USC and UCLA were postponed and will be rescheduled for a later date. Oregon hopes to play this upcoming weekend.

The Cardinal split their road trip down to Arizona and Arizona State, and now they can finally play home games in Palo Alto instead of Santa Cruz. Stanford had a good performance against Arizona, especially from junior forward Jaiden Delaire, shooting seven of 12 from the field and scoring 21 points. Against the Sun Devils, even with Delaire and senior forward Oscar da Silva scoring a combined 39 points, it was not enough to get the win. I’m starting to question the legitimacy of Stanford; hopefully, they can get hot to make it to the tournament.

Even though the Beavers were swept by USC and UCLA this weekend, the main reason I have them ahead of Utah right now is because of how close the game against UCLA was. Oregon State played tough against UCLA on the road, almost winning the game in the remaining seconds, but a loose ball from senior guard Ethan Thompson caused a turnover and the loss. After an unfortunate weekend for the Beavers, hopefully, they will get back to their winning ways from before.

The Utes had a very impressive road win against Colorado. But is it enough to leap Oregon State? Not yet. Utah did have a bad loss against Washington in the game prior to their win against Colorado, but it shows the inconsistencies of not only Utah but the conference, in terms of constant success. Senior guard Alfonso Plummer shot 8-13 off the bench and led the team with 23 points. The Utes need to be more consistent to really rise in the rankings.

The Sun Devils swept California and Stanford this past weekend at home, and it finally seems Arizona State is getting fully healthy again. The Sun Devils snapped a five-game losing streak this past weekend, led by senior guard Remy Martin. Against both California and Stanford, Martin dropped team-highs in scoring in both games, with 19 points against California and 23 points against Stanford. This team seems to be getting more durable as the season continues, with more players coming back from injury and COVID-19 protocol.

The Cougars were on a five-game losing streak heading into this week, a loss by the hands of Colorado extended that to six games, but a win against Washington broke the curse. WSU got beat on both sides of the court against Colorado, but a hot start against the Huskies led them to their first win since Jan. 7. Senior guard Issac Bonton finished with 25 points against Washington on 10 of 17 shooting. A good day for WSU can bring some momentum heading into the future.

The Huskies lost against WSU at home this past weekend, making it three losses in a row against WSU head coach Kyle Smith. Washington did not have any reliable shooters other than senior guard Quade Green, who shot 7-18 and collected 20 points. There was a lack of scoring all around and Washington just did not know what to do. They looked flustered.

The Golden Bears got swept again by Arizona and Arizona State this past weekend and now are on a four-game losing streak. The Golden Bears just cannot find any success in scoring, failing to score more than 68 in each of their last four games. Being the only double-digit loss team in the Pac-12, it just made sense to leave the struggling Golden Bears at the bottom.