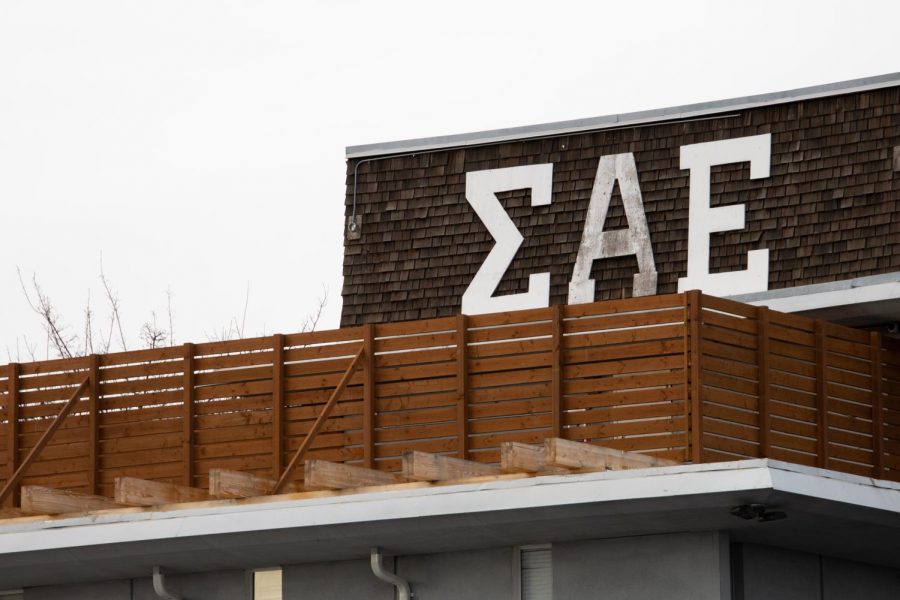 This week, SAE’s university status changed from “Investigation Pending - COVID Violations” to OK, meaning the chapter is currently in good standing with WSU.

A WSU student and former fraternity chapter president will face a contested hearing on Feb. 16 regarding pandemic violations that occurred last semester.

Zachary Thornton, former president of Sigma Alpha Epsilon, received an infraction for Duty to Control Premise on Sept. 10. The Pullman Police Department received a report of a party with more than 10 people at the SAE facility with no social distancing in place, according to public records obtained from Pullman PD.

The Evergreen contacted Thornton and current SAE president Robert Myers, but they did not respond.

When officers arrived at SAE on Sept. 10, multiple individuals were seen leaving. Officers did not enter the building so they did not know exactly how many people were inside, said Pullman PD Sgt. Chris Engle.

This was not an isolated incident for the SAE chapter. Pullman PD received several similar reports in the two weeks prior to Thornton’s infraction. Officers responded on Aug. 21. and Aug. 24 to reports of parties at SAE that had 10 or more people present with no social distancing or masks. No violations were observed during those incidents, according to public records.

On Aug. 25, Pullman PD Chief Gary Jenkins emailed Dan Welter, director of WSU’s Center for Fraternity and Sorority Life. Jenkins notified Welter of the incident that occurred the night before. Welter told Jenkins the SAE president had been contacted and that he would see if the incident was enough for the IFC to begin their “process,” according to public records.

“The Center for Community Standards will be opening a formal investigation into this chapter,” Welter emailed to Jenkins in the public records.

The Evergreen reached out to Cass Riggan, director of public relations for WSU’s Interfraternity Council, for comment.

“At this time we have no solid information and cannot provide any commentary,” Riggan responded to the Evergreen’s email.

SAE was a part of that list when 55 people were living in the fraternity, according to public records.

While Greek chapters are not open at full capacity, there is not a clear limit for chapters to abide by. Each chapter decides how many members are allowed to live in their facilities while operating during the pandemic, according to an Evergreen article.

The confirmation of the outbreak came less than two weeks after Pullman PD received multiple reports of potential parties at SAE and issued Thornton’s infraction.

Heston forwarded the email to the Pullman Fire Department and carbon copied a few individuals, including Pullman Mayor Glenn Johnson, according to public records.

“It is just a matter of time before it becomes prevalent everywhere in the college community living groups and apartments so please use extra caution to protect yourselves as needed,” Heston said in the email in the public records.

Jenkins forwarded the email to Welter to notify him of the outbreaks at Greek Row, according to public records.

“We play a role in addressing COVID-compliance-related concerns,” she said. “That is a portion of our caseload this semester.”

If a nuisance party infraction was issued, then CCS requests a police report of the incident. Metzner said CCS sends a notice to a group if they are being investigated and meets with the organization to educate involved parties about their rights during the investigative process.

Organizations are assumed not responsible at the onset of the investigation, she said. CCS staff meet with the organization’s representative, typically the president, to explain the process. The president can submit additional documentation.

A memo is then released, summarizing the investigation’s findings. Metzner said the president can respond to the allegations and move forward with resolution options.

“It’s intended to be educational and transparent, so the chapter president has the ability to inform, provide information, review what we have,” she said.

If the group disagrees, the president can have a one-on-one hearing with a conduct officer. She said the officer determines if it was more likely than not that the violation occurred and what outcome would be appropriate.

Metzner said the longest pathway to resolution is a university conduct hearing. An administrative law judge facilitates the hearing and is held in front of a panel of students, faculty and staff.

Common outcomes during the resolution process include developing social activities that meet COVID-19 compliance, she said. CCS also refers groups to Cougar Health Services. CHS facilitates the TOGETHER Workshop, which looks at COVID-19 impacts and ways to safely socialize.

“If there is knowing spread of COVID, that certainly would be an aggravating factor that we would consider for outcomes,” Metzner said.

SAE and Phi Kappa Sigma were the only Greek chapters cited for infractions last semester. Other infractions took place off campus and at housings scattered around Greek Row, according to public records.

Engle said the initial fine for an infraction is $250, with subsequent fines costing at least $350. The judge takes aggravating and mitigating factors into consideration when issuing the fine.

Anyone can submit a report to CCS online, including non-compliance to COVID-19 protocols. Anonymity is an option, Metzner said.

This week, SAE’s university status changed from “Investigation Pending – COVID Violations” to OK, meaning the chapter is currently in good standing with WSU.

Editor’s Note: The headline was updated.