Moscow Farmers Market was deemed as essential business, brought another season of historic vendors together 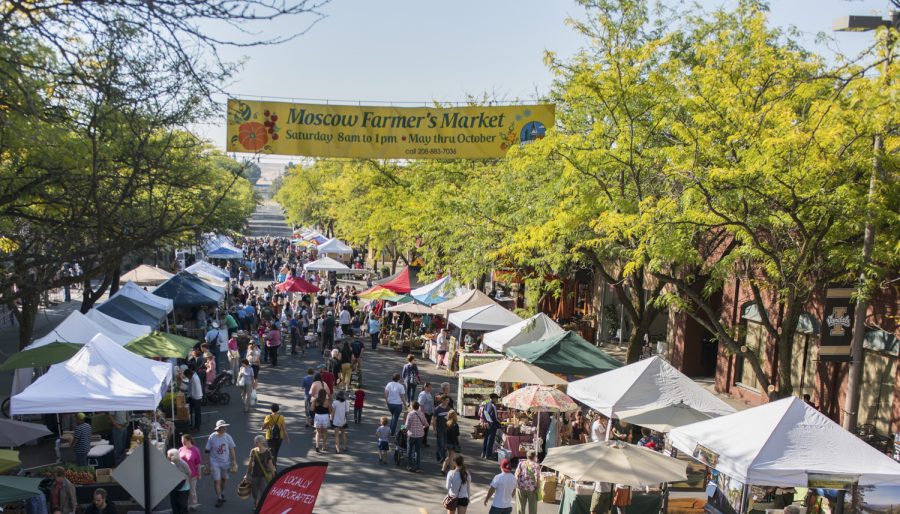 In 1976, the Moscow Farmers Market opened for the first time and since then has brought the community together with vendors from all across the Palouse region.

The farmers market would typically host 130 vendors during a normal season. Argona said the market has only been able to host about 90 vendors this season.

The market has some core and historic vendors that have been with the market for several years, she said.

Vendors such as Wilson Banner Ranch, Hagen’s Orchard, Tonnemaker Hill Farm, Calhoun Family Fruit, and Taylormade Kitchen have been a part of the market for 30-40 years, she said.

“All of the vendors that you see at the Farmers Market are the maker, owner, producer, creator [and] grower of their item,” she said.

There is never going to be someone working at a booth that doesn’t have some hands-on experience in their business operation, Argona said.

Tents, tables, umbrellas and trailers have been a useful setup for vendors over the years. The best time to buy produce at the market is in August, she said.

“People are coming down and shopping and staying longer because of that abundance of produce, and then you have the return of students in late August,” Argona said.

Jamie Hill, chair of the Moscow Farmers Market Commission, is in charge of advising staff for operations at the market.

“I wanted to be on the market commission because I adore our market,” Hill said.

It is agriculturally based, which makes the market unique and speaks a lot to this area, Hill said.

Argona said fresh food and agricultural products are still a top priority for folks in the community.

Many of the vendors are in the high-risk category for COVID-19 or live in a multi-generational home, she said.

“Pretty early on we made it clear that we were going to be flexible,” she said. “If they chose to opt-out for the season, it wasn’t going to affect their tier status with the market.”

On average, the market typically attracts over 10,000 people on a Saturday, Argona said.

“It was a godsend that the Idaho’s governor’s office deemed farmers markets as essential,” she said.

Some of the individuals Argona talked to were surprised by the community coming out and supporting them, she said. They felt like customers were actually buying more.

“It was pretty tough all around, but we made the most of it,” Argona said.

The Moscow Farmers Market operates from 8 a.m. to 1 p.m. every Saturday, May through October.