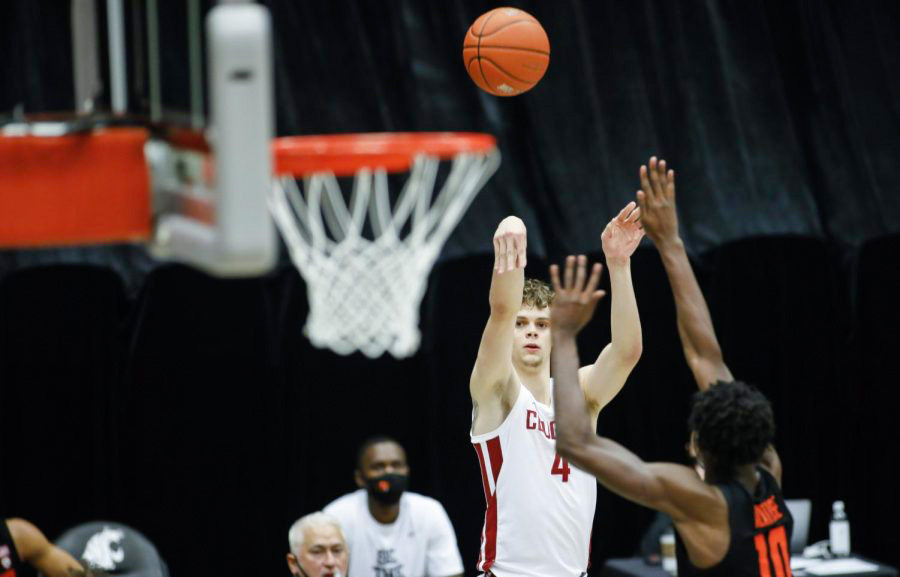 The WSU men’s basketball team will finish their Oregon road trip and face the Oregon State Beavers at 3 p.m. on Saturday at Gill Coliseum in Corvallis, Oregon.

WSU comes off a victory against the University of Oregon Ducks on Thursday that went down to the wire. Foul trouble and turnover numbers on both sides forced the game to have a possession-by-possession feeling to finish the contest.

In the end, it was the Cougars who came out on top as WSU achieved its first-ever win in the Matthew Knight Arena in Eugene, Oregon.

Senior guard Isaac Bonton, who led the team with 23 points, didn’t know it was the first win in the Ducks’ arena in program history, but he’s grateful for the achievement.

“I’m glad I could be a part of that,” Bonton said.

This will be the second time that WSU (11-7, 4-7) faces a repeat opponent this season. WSU defeated Oregon State (9-7, 5-5) 59-55 in game three of the Cougars’ schedule back on Dec. 2, 2020. This game showcased season high performances from junior forward Aljaz Kunc and sophomore forward DJ Rodman, who scored 12 and 13 points, respectively.

Rodman also was benched early in the second half after accidentally colliding with freshman center Efe Abogidi’s elbow and getting a bloody nose from it. Head coach Kyle Smith said after the game that Rodman should be fine to play the Beavers on Saturday.

The Beavers come off a 20-point victory over the Washington Huskies on Thursday at home. Oregon State is now 4-2 in their last six games and they sit in seventh place in the conference standings.

Smith said this Oregon State team should give them new challenges and obstacles that the Cougars didn’t encounter in the previous matchup.

“Oregon State’s got their ears pinned back because we were able to beat them earlier in the year, and they’re an entirely different team,” Smith said. “They’re playing smaller, they’re more athletic, a little more determination and a lot of confidence. So it’ll be tough.”

At this point in the season, Oregon State’s leading scorer is still senior guard Ethan Thompson who averages over 16 points per game. He and sophomore guard Jarod Lucas are the only two players on the Beavers’ roster who average double-digit points.

Another notable player on Oregon State is junior forward Warith Alatishe who leads the team in rebounds per game. Alatishe averages over eight rebounds per game, which ranks second in the conference – plus he comes off a double-double performance against Washington on Thursday.

Alatishe now lines up at the four spots instead of at the three when he played WSU last. This role change for him has given the Beavers more length and rebounding opportunities at the position.

“Oregon State kind of seems like they’re in a groove right here, so we’re going to have to do a really good job,” Smith said.

Senior guard Isaac Bonton said he’s excited to face another Oregon team, as the Portland native aspires to take down any team from Oregon he can. Ever since coming to WSU, Bonton has not lost to a single team from Oregon across his two seasons.

“We’ll figure it out. They’re playing great basketball right now, so you got to respect them coming in,” Bonton said. “Just got to do what we do to get the win.”

WSU has not defeated the Beavers in Gill Coliseum since 2013, and they’re currently on a five-game losing streak on the road against Oregon State.

WSU will tip off against Oregon State at 3 p.m. on Saturday at the Gill Coliseum in Corvallis, OR. Fans will not be allowed to attend, but the game will air on the Pac 12 Network.