Cougars drop close one against Beavers 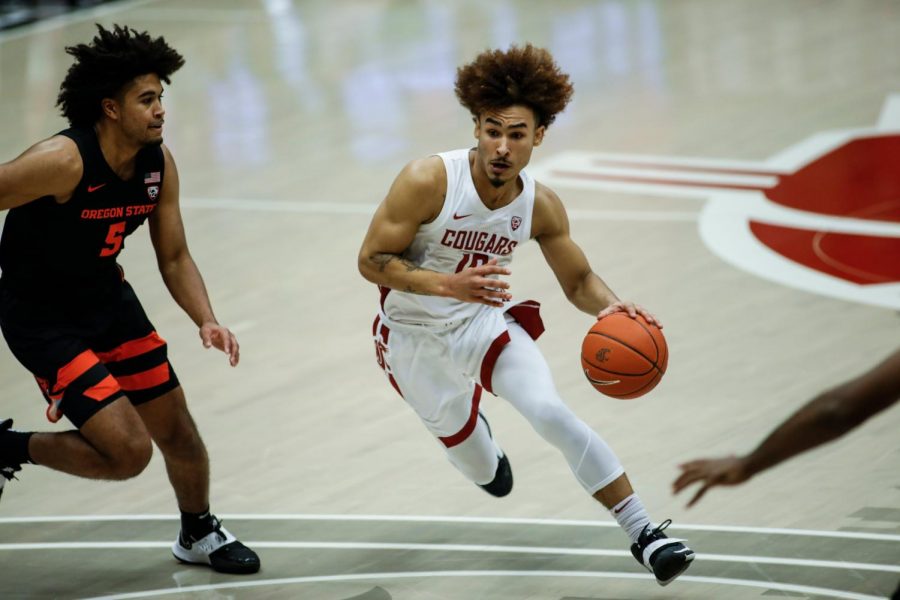 WSU’s two-game winning streak came to an end as the Cougars (11-8, 4-8) were defeated by the Oregon State Beavers 68-66 on Saturday at the Gill Coliseum in Corvallis, Oregon.

“Just a really tough battle,” Smith said. “Just couldn’t get a break there down the stretch.”

Senior guard Isaac Bonton had an off night shooting the ball as he scored just seven points on 2-14 shooting from the field. This is the fewest number of points he has scored since facing Utah last month, when he scored just four points.

Despite the poor shooting performance, Smith said Bonton still had a good game, considering that he added eight assists to his stat line, tying a career best.

“He pressed a little bit early in the second half, but he settled down and got back in there, and we had a chance to win,” Smith said.

The final minutes, let alone seconds, of this game went back and forth. WSU had a lead with four minutes left in the game, but a final rally from OSU (10-7, 6-5) gave the Beavers enough to pull away with the home victory.

Freshman center Dishon Jackson went down with an ankle injury during the opening minutes of the second half. He came down on his ankle at a weird angle and instantly hit the floor in pain. Jackson was helped off the court by the WSU trainers and was barely putting any weight on the ankle.

Jackson didn’t return for the remainder of the game, and Smith said his status is still unknown at this time.

The Cougars’ leading scorer was sophomore guard Ryan Rapp, who came off the bench and put up a career-high 15 points on 5-7 shooting, including three three-pointers. This is the first time in Rapp’s career he has led the Cougars in scoring.

Sophomore forward DJ Rodman, who suffered a busted-up nose in the previous game against Oregon, returned to the starting lineup once again and put up a career-high of his own with 14 points off 5-10 shooting, including four three-pointers. Rapp and Rodman made every three-pointer for WSU except for one against the Beavers.

Rodman said this performance just showcases his confidence in his shooting ability and the trust he has from the coaching staff to take advantage of the open looks.

“Every time I’m open, I just shoot the ball,” Rodman said. “That’s what’s been working, and I’ve been hitting shots.”

Besides freshman center Efe Abogidi putting up 12 points, three second-year Cougars put up double-digit points against the Beavers, with sophomore guard Noah Williams being the third with 12 points. Rodman said it’s great to have second-year players like himself to have good performances because it shows how their chemistry with one another has developed in the past year.

The story for the majority of the game was the Cougars’ foul issues and the Beavers’ turnover problems. OSU shot the ball 46 percent from the field and 38 percent from three, which outdid the Cougars in both categories. The Beavers turned over the ball an immense number of times in the first half and could never get a grasp on their ball control throughout the game.

Even though the Beavers turned over the ball, WSU could not catch a break from the referees. The Cougars had 10 fouls in the first half and 16 in the second half, while the Beavers had 15 fouls for the entirety of the game.

When asked about the officiating, Smith said it surprised him that the Beavers didn’t have more fouls considering their high ranking in most fouls per game in the nation.

“We’ll have to look at it, but kudos to [Oregon State] for really buckling down and not really fouling on those drives,” Smith said.

WSU will finally return home for the first time in two weeks to take on the UCLA Bruins for the second time this season. Tip-off is at 8 p.m. PST on Thursday at Beasley Coliseum in Pullman. Fans won’t be allowed to attend, but the game will air on FS1.