Trojans get best of WSU at home 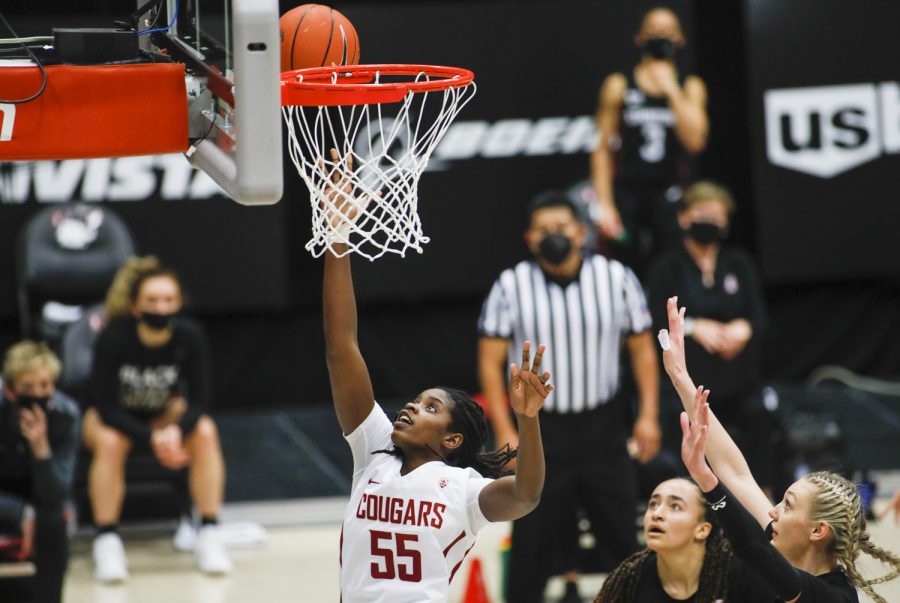 Sophomore center Bella Murekatete completes a layup during the game against Stanford.

After taking down the UCLA Bruins in a historic upset, WSU closed out their weekend in Beasley with a loss against the USC Trojans 81-71.

“We have to be on edge and zoned in,” head coach Kamie Ethridge said. “There’s no room for error.”

Ethridge had not collected a win against USC throughout her time in Pullman, and she was eager to check that task off her to-do list.

When the two teams faced off in Los Angeles on Jan. 15, USC handed the Cougars their first road loss of the year, 81-77 in overtime.

WSU had other plans this time around, as USC would come to Pullman in their second bout of the year.

The Cougars got the opening tip-off, and junior forward Ula Motuga put the game’s first points on the board. Motuga continued to find success early and was responsible for the first eight points of the game for WSU.

The Cougar offense came out firing on all cylinders, quickly putting together a 9-0 run, that led to an early three-possession lead over the Trojans.

WSU scored 22 points in the first quarter, the most the team has scored in an opening period all year. Motuga collected half of those points for the Cougs, along with four rebounds and a steal.

“[WSU players] are finding ways to succeed, and I’m just so proud of them,” Ethridge said.

After the strong start, WSU led the Trojans 22-15 going into the second quarter.

USC scored five unanswered points to bring the game to within one possession, but the third three-pointer of the season by redshirt sophomore guard Michaela Jones extended the WSU lead.

The Trojans managed to tie the game up at 25 apiece, outscoring the Cougars 10-3 with over half of the second quarter left to play.

After a call by the game’s officials that negated the second three of the game for Jones, momentum had completely shifted, and USC took their first lead of the game.

The Trojans continued to capitalize on their newly found momentum, and the Cougars simply could not keep up.

In merely half a quarter, the Trojans dug themselves out of a hole and the Cougs found themselves trailing 41-34 going into the halftime break.

The Cougars started the second half by outscoring the Trojans 7-1. The team’s leading scorer, freshman guard Charlisse Leger-Walker, scored five of those points, hitting double-digit points for the fourteenth time this season.

Motuga cracked her career high in points scored as she collected her 18th point of the game, cutting the USC lead to six.

WSU’s defense struggled to stop the Trojans, who topped 60 points in the final minute of the third quarter.

Motuga continued her magnificent day and collected her first career 20-point performance, leading to a 63-56 USC lead going into the fourth quarter.

The Cougs had scored 60 points at the eight-minute mark in the final frame, as Charlisse Leger-Walker snagged her seventh assist of the game.

Sophomore guard Johanna Teder drained a corner three and cut the USC lead to one with six minutes left.

USC eclipsed 70 points. The Cougs soon followed with a three from Charlisse Leger-Walker that tied the game at 71 with just over two minutes left.

The Cougar defense couldn’t hold the Trojans’ offense, which scored five unanswered points to take a two-possession lead with 42 seconds left in the game.

There would be no late-game heroics this time, as USC collected free throws off of WSU fouls and the Cougs fell to the USC Trojans for the second time this season, 81-71.

Motuga led the Cougs in scoring with 25 points. Charlisse Leger-Walker was close behind with 24 of her own.

WSU will be on the road to face off against the Arizona Wildcats in prime-time action on Friday. Tip off is at 6 p.m., and the game can be streamed live on the Pac-12 Network.