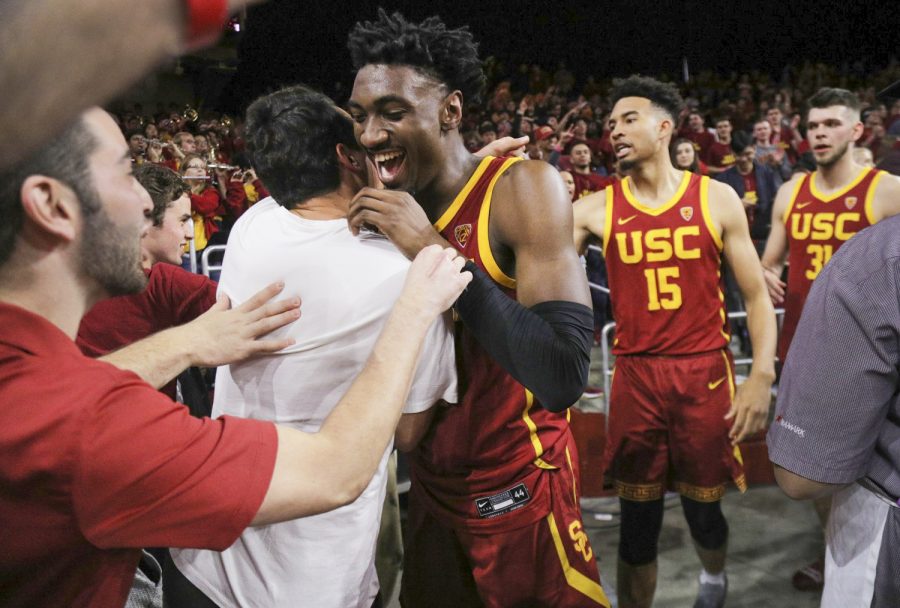 The Pac-12 men’s basketball season is counting down, with weeks to go until the Las Vegas tournament.

No. 20 USC dethroned their inter-city rival, UCLA, in their first matchup of the season on Saturday.

WSU got their first win in Eugene, Oregon since 2008, and Arizona got swept for the second time this year.

After what seemed to be a crazy weekend for the Pac-12, here are my Pac-12 power rankings with weeks to go.

The Trojans had a great week, first beating Stanford on the road by six, and then beating the Bruins at home by 18. Freshman forward Evan Mobley scored 23 points against Stanford, pairing it with 11 rebounds to get a double-double. Against UCLA, sophomore guard Ethan Anderson and redshirt senior guard Tahj Eaddy were the only Trojans in double digits for points scored. The momentum swung USC’s way, and the Trojans have now taken over the conference.

The Bruins face their second conference loss of the season at the hands of their inter-city rival on Saturday. UCLA just could not shoot the ball well against the Trojans, only shooting about 34 percent from the field, about 16 percent from three-point range and about 38 percent from the free-throw line. They flat out got exposed against USC without redshirt junior forward Cody Riley and hope to move on.

After a disappointing week for the Buffaloes, they bounced back with a home win against Arizona. Led by the power duo of senior guard McKinley Wright IV and junior forward Evan Battey, Colorado was able to hold off Arizona’s late comeback. Battey and Wright combined for 38 of the Buffaloes’ 82 points and looked like the next best contender to USC and UCLA atop of the conference.

The Cardinal started the week off on a sour note by losing to USC at home, but a season sweep of California made up for the slow start. Against USC, junior forward Jaiden Delaire dropped 22 points in a losing effort, coming up a little bit short in the end. In both games against California, however, it was all about senior forward Oscar da Silva, scoring 24 points and collecting 11 board on Thursday, and then pairing it with 23 points on Saturday. The Cardinal relied heavily on da Silva all weekend to lead them to victory, and for those wondering why I moved Stanford up two spots? Because they have been winning, that’s why.

The Ducks finally played their first true weekend since Colorado and Utah back in early January, and the lack of games played showed. Oregon lost to WSU at home on Thursday, the first time WSU won in Eugene since 2008, even with redshirt senior forward Eugene Omoruyi scoring 21 points against the Cougars. The Ducks did bounce back against Washington, even with a two-person bench, with Omoruyi scoring 25 points on eight of 12 shooting. The Ducks just need to get their routine back to climb in the Pac-12.

I don’t know what happened, but as soon as the Wildcats started to climb the rankings, they got swept on the road against Colorado and Utah. Against the Utes, Arizona shot 37 percent from the field and about 22 percent from the three-point line; it was just a bad shooting day for them. The shooting for the Wildcats drastically improved against Colorado, but it was not enough to come back from their first-half deficit. After getting swept for the second time all year, Arizona cannot afford a losing streak this late in the regular season.

After getting swept the previous weekend, the Beavers bounced back by sweeping WSU and Washington at home this past weekend. Against Washington, all five starters for Oregon State reached double figures in terms of points scored, with sophomore guard Jarod Lucas leading the team with 19. Against WSU, however, a low-scoring game paired with an 11-0 run late in the second half gave the Beavers the win. OSU seems to be heading in the right direction now.

The Utes had a good week, defeating Arizona at home by 15 in their only game this past weekend since their game against Arizona State got postponed. Utah was led by junior forward Timmy Allen, scoring 18 points and collecting nine rebounds in their win against the Wildcats. As a team, Utah shot about 51 percent from the field and about 53 percent from the three-point range. A good weekend for Utah should keep things competitive in this conference.

The Cougars had a mediocre week, starting off with a big win on the road against Oregon, but coming up just a tad short against OSU. WSU had their first win in Eugene in a long time this past Thursday against Oregon, with senior guard Issac Bonton having 23 points on 7-13 shooting. Against the Beavers, however, Bonton struggled, only scoring seven total points on 2-14 shooting. The inconsistencies for this WSU team are holding them back from really climbing up the rankings.

The Sun Devils did not play this weekend because of COVID concerns within the Arizona State program. The Sun Devils have been struggling with COVID throughout the season and have a very limited bench. The only reason I have moved them down is that WSU beat Oregon on the road this week.

The Huskies got swept by Oregon and Oregon State this past weekend and their defense was lackluster, allowing a total of 177 combined points in both games. Senior guard Quade Green struggled against the Beavers, only having one field goal and scoring two points throughout the contest. Against Oregon, Green did have a bounce-back game, scoring 23 points on seven of 14 shooting, but it still was not enough for the Huskies to get a win.

Even with junior guard Matt Bradley returning to the starting lineup, the Golden Bears extended their losing streak to six consecutive games this past weekend. California got swept for the season against their cross-town rival Stanford in back-to-back games. Bradley scored 24 points in his first game back and in the second game, he scored 15 points. The success for California seems to be running out on the season.