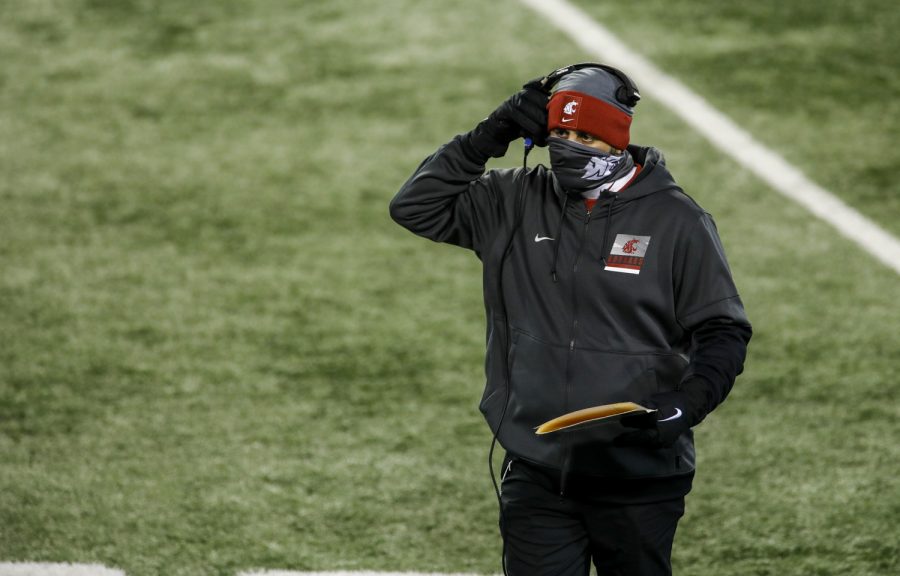 WSU head coach Nick Rolovich walks to the sideline during the game against Oregon Nov. 14 in Martin Stadium.

Head football coach Nick Rolovich’s debut recruiting class does not blow anyone’s socks off upon first glance. The ninth-ranked class in the Pac-12 and 60th ranked nationally, according to 247Sports, is nothing to write home about.

However, a deeper look would show that this is a great first recruiting class for Rolovich. First of all, the class ratings, which the rankings are based on, do not factor players who transferred in from other major universities.

The Cougars have four such players, including Jarrett Guarantano, a graduate transfer quarterback from the Tennessee Volunteers. Guarantano’s high school ratings would make him the second-highest rated WSU recruit since 247Sports started tracking player ratings in 2000.

Another thing to consider is the fact that class ratings favor a larger class, and this was by no means a large class. The Cougars only signed 20 players that are either coming in as a true freshman or are coming in from a junior college.

Only one other class in the past 10 years has seen the same amount of Cougars sign, as the 2019 class was another 20-recruit group. Aside from that year, there has been one year of 23 players and nothing else below 26 recruits.

It is clear that Rolovich was pursuing a class built around quality rather than quantity. The average rating of the class, still not factoring in the transfers, is the third-highest that the Cougars have seen in the past ten years.

The 2021 class is still the third-highest average rating for any WSU class dating all the way back to 2000. It is a class that is more well-rounded than almost any other group that has ever come to the Palouse. After factoring in the four transfers, it is arguably the best top to bottom class in WSU history.

Looking at the last four WSU coaches’ debut recruiting class, including Rolovich’s, this year is easily the best first class a coach has had.

Mike Leach’s 2013 and Bill Doba’s 2004 classes both had higher national rankings while having significantly lower average ratings. This is in large part due to the size of the classes, as Leach brought in 30 players and Doba brought in 28. Doba’s 2004 class was also the highest-ranked class nationally in WSU history, coming in at 22nd in the country, according to 247Sports.

Paul Wulff’s first class in 2009 had both a lower national ranking and average rating.

Comparing Rolovich’s debut to those three is eye-opening. A first-year coach is always going to have a bit of difficulty recruiting against established coaches, but Rolovich crushed expectations for a first-year coach at WSU. It is even an incredible class for a coach of any tenure with the Cougars.

While there will not be a ton of new faces in Pullman come next season, the players coming to Martin Stadium are going to be players that can be impact players. From top to bottom, every single one of the recruits will be able to have an influence on the team and will most likely see the field at some point in their careers.